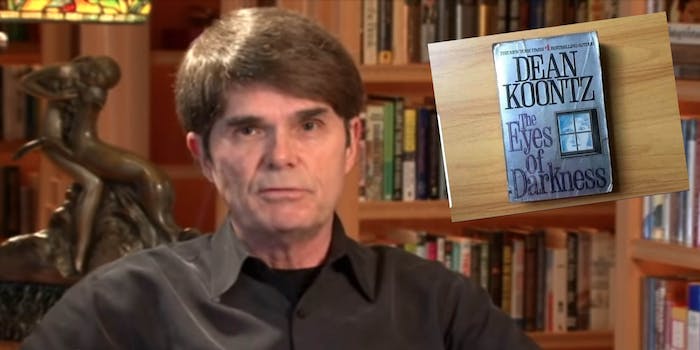 'In around 2020 a severe pneumonia-like illness will spread throughout the globe.'

There’s now a conspiracy theory that Dean Koontz predicted the spread of the deadly coronavirus in his 1981 book, The Eyes of Darkness.

COVID-19, a new strain of the virus, has spooked people both in the U.S. and nationally. Though it only has a 2% fatality rate right now, there are scattered reports of people being infected all across the globe.

The virus originated in Wuhan, China.

Rewind 40 years ago, and here’s what Koontz said about a possible “pneumonia-like illness” that will “spread throughout the globe” around 2020.

The illness will “[attack] the lungs and the bronchial tubes and resisting all known treatments,” reads a passage from The Eyes of Darkness, a thriller novel.

“They call the stuff Wuhan-400 because it was developed at their RDNA labs outside of the city of Wuhan,” reads another passage, which can be seen on Amazon’s preview of the paperback edition of the novel published in December 2008.

Before you start freaking out: The “Wuhan-400” Koontz speaks of is a human-made weapon with a 100% fatality rate and 4-hour incubation period. None of that fits with coronavirus.

The fact-checking website, Snopes, also points out that while the 2008 publication of the book mentions Wuhan, other iterations used a different name for the fictional weapon. (Other versions say the weapon was made in Russia and is called “Gorki-400.”)

“When we searched a 1981 edition of this book available via Google Books we found no references to ‘Wuhan,’” reads the Snopes investigation.

For now, we’ll assume this is all just a coincidence—but we’re here for the conspiracy theories.