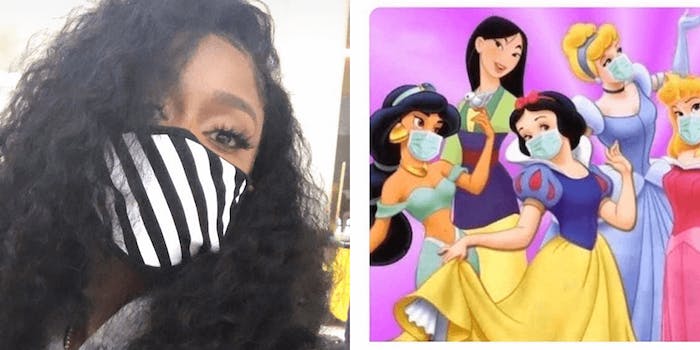 In the meme, Mulan is the only Disney princess not wearing a mask.

American rapper Kash Doll is under fire after posting a meme to her Instagram account that some are calling racist.

The rapper, known for singles like “Ice Me Out,” posted a now-deleted selfie of herself in an antiviral face mask to her Instagram Story. She also posted an image of the Disney princesses wearing similar masks, save for Mulan. Text on the photo reads, “Sorry ‘MULAN’ but you never know.”

The post is referencing coronavirus, an outbreak that began in China and has claimed more than 1,300 lives and infected more than 43,000 others.

Though the post in question has since been deleted, Twitter account @PopBase captured it and tweeted it out. It’s gotten more than 1,000 retweets and more than 3,000 likes at the time of writing.

Critics online have been less than receptive.

“Its not a ‘joke’ its called a racist comment,” one user said.

However, according to one Twitter user, “No one laughed.”

Several people are now flocking to her Instagram comments to demand an apology. Since the incident, commenters have asked she recant her statements and offer her regrets.

“You and i both know if she does apologize, she wouldn’t mean it in the slightest,” one comment reads.

Though Doll has yet to address the controversy directly, she posted a vague tweet that seems to allude to it.

“Y’all always mad about something (somebody you don’t even kno) said or did,” she tweeted.

Kash Doll did not immediately respond to the Daily Dot’s request for comment.