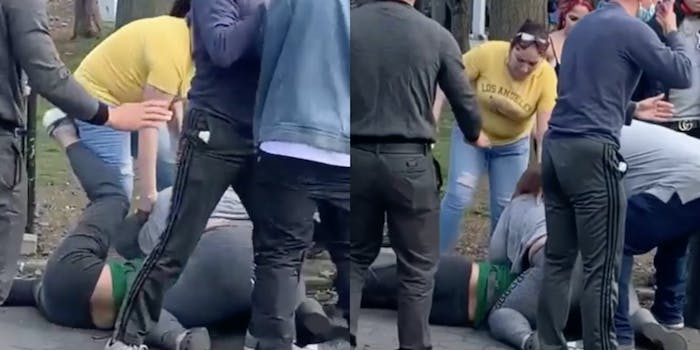 A boy in the family involved reportedly tripped on Ponzu's leash.

A video posted online shows an Asian woman getting attacked while she was walking her pets through a Brooklyn park on April 4. Her cat, Ponzu, had over 33,300 followers on Instagram and succumbed to his injuries allegedly sustained during the incident.

The New York Police Department (NYPD) told the Daily Dot on Thursday that one person allegedly involved in the incident was arrested.

The video was posted to the “Public Freakout” subreddit on Wednesday. In the clip, there is a physical and verbal altercation between the pets’ owner, identified as Chanan Aksornnan, 34, and a family of eight.

“Get off her! Get off her!” a man screams as a Hispanic woman can be seen holding Aksornnan to the ground and punching her.

As more people gather around to try to intervene, a man pulls the woman off of Aksornnan and is hit in the face, before the woman runs from the park.

“On Sunday, April 4, 2021 at approximately 1651 hours police responded to a 911 call of an assault inside of McCarren Park within the confines of the 94th Precinct. Upon arrival police were informed by a 34 year-old female that she had a dispute with an unknown Hispanic female suspect when the suspect punched and kicked the victim causing cuts and bruises. A 50 year-old male intervened in the dispute and was struck with a closed fist to his face causing a laceration to his nose. The suspect then fled the location,” the NYPD told the Daily Dot in a statement.

The NYPD also said a young boy tripped on Ponzu’s leash. Daily Mail reported that due to the stress and injuries allegedly caused by the incident, Ponzu had a heart attack and died at the park.

Ponzu had a dedicated fanbase who followed the cat’s close relationship with the owner’s other animals, including a parrot, dog, and another cat. On Instagram, Aksornnan, who runs Ponzu’s account @ponzucoolcat, posted to let the community know what happened and mourn the loss of her treasured pet.

“Dear Friends – it is with an immense sadness and anguish that we bring you this tragic news: our beloved Ponzu died on Easter Sunday after suffering shock and injuries from an incident in our park,” Aksornnan wrote.

“Our family got physically assaulted that day and there is a pending police investigation to find and charge the perpetrators who showed no empathy for animals nor humans,” the post read.

The photo garnered 26,139 likes and 3,367 comments since being posted on April 7. “We need justice NOW. I am SO sorry for your loss oh my god my heart is breaking,” one user wrote in response.

For many, Ponzu’s death was inconceivable as the cat was injured during a family walk through the park, an activity usually correlated with excitement for pets, not distress.

“Omg who would hurt your sweet cat. I hope the person responsible gets punished severely that’s what they deserve,” another user commented.