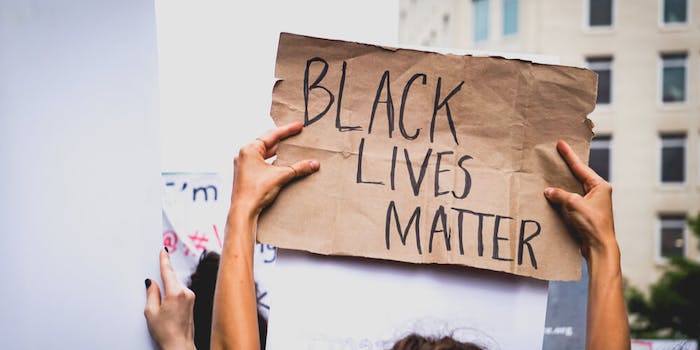 There are at least 50 accounts claiming 'Black lives don't matter.'

Instagram is hosting dozens of accounts with anti-Black phrases, including “Black lives don’t matter,” in their usernames or display names. A Daily Dot search revealed the existence of at least 50 pages with different variations of the phrase as their Instagram handle or display names.

The antithesis to “Black Lives Matter” is sometimes used to express the hopelessness many feel when the justice system deals yet another blow to Black people with rulings and proceedings. This week, especially in the buildup and aftermath of the Amber Guyger trial, social media users commented “Black lives don’t matter” to express resignation at Guyger’s sentence of only 10 years when Black people have to serve far longer for far less heinous crimes.

LMFAO. our justice system is a joke. she KILLED a man in his own fucking home unarmed and she isnt getting life?? black lives really dont matter huh? https://t.co/eBFTUDKHTG

Obviously Black Lives Dont Matter! This is injustice at it's best!

One account, @blacklivesdontmatter01, has on its display photo an image of bulging eyes and exaggerated lips, an explicitly racist caricature of Black people.

If clicked, the racist hashtag, which also includes a homophobic slur, leads to a page with Instagram’s community guidelines.

“We want to foster a positive, diverse, community,” the guidelines say. “We remove content that contains credible threats or hate speech, content that targets private individuals to degrade or shame them…”

The guidelines also say the platform doesn’t “encourage violence or attack based on their race, ethnicity, national origin…” adding that Instagram may allow the speech if it is “shared to raise awareness.”

But the comments are blatantly racist and play no role in raising awareness. The post and the comments have been on the platform for three years.

Another account with the handle @donkey_slaves, also with the name “Blacklivesdontmatter,” shared and mocked a video of someone talking about their experience of coming out to their family as nonbinary. The video has been on Instagram since December 2017. The account @blacklivesdontmatterbitches says in its description “get butthurt pussy.” An account called @black_lives_dont_matter.v2 has the display name “Adolf.” @blacklives_dontmatter_ has the display photo of a Black man in a noose.

One account with the handle @blacklives.dontmatter had a display photo of the hand gesture known to symbolize white supremacy. The account showed up on Instagram until Wednesday but appeared to be deleted by Thursday afternoon.

Another account, @black_lives_dont_matter6938474 had the display name “indians are smelly,” two followers, and four posts. By Friday evening, the account didn’t appear in a search.

Many of 50 “Black lives don’t matter” accounts are set to private, and the Daily Dot was not provided access to their posts.

Many of the accounts, even those with only two followers, have one follower in common, an account with the handle @balamoryfun. The display name on the account is “McCreedy Da Nitty,” and the account posts extensively about getting high.

It’s unclear why these racist accounts have been allowed to stay on Instagram for this long. Accounts that were accessible by the Daily Dot included posts that were made years ago and have remained on the platform. Instagram’s “Terms of Use” say that its aim is to make their users’ experiences “positive and inclusive” and they “have teams and systems that work to combat abuse and violations of our Terms and policies, as well as harmful and deceptive behavior.”

A Facebook company spokesperson said on Thursday that the company is looking into specific accounts flagged by the Daily Dot and “will remove those that violate our policies.” The flagged accounts are still up as of Saturday morning.

Facebook, Instagram’s parent company, has recently come under scrutiny for policing Black voices that call out white supremacy. An April investigation by USA Today found that Facebook was repeatedly punishing Black people on the social media platform for simply writing “white people” in their posts.

Facebook’s measures against Black voices criticizing white supremacy is punitive, but the platform can be frustratingly lax when it comes to policing anti-Black pages. A “Black face” page operated on Facebook allowed to stay on for months until Facebook finally took it down in response to the Daily Dot’s investigation of the page. More than 100 people had reported the page but were initially told it didn’t violate Facebook’s community standards.

It’s unclear if anyone has reported any of the 50-plus anti-Black accounts on Instagram.