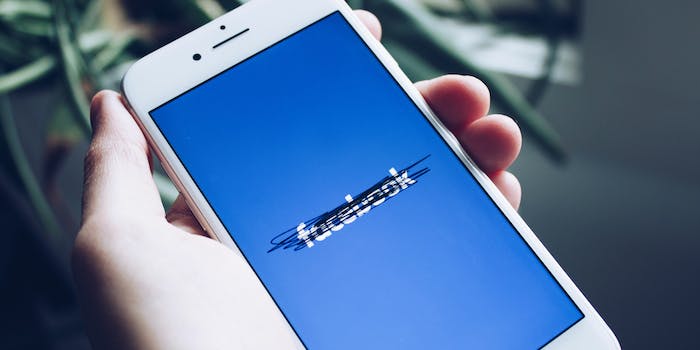 Facebook refused to take down this blackface page for 4 months

The page displayed photos of people in blackface—and more than 150 negative reviews.

On Tuesday, Facebook finally removed a public page called “Black Face” that featured photos of people wearing blackface. The page remained active for four months despite pressure from multiple users to remove it.

The page’s earliest posts can be traced to February. It had just over 100 Likes before it was taken down.

At least six people have told the Daily Dot that they reported the “Black Face” page and received a message from Facebook saying it didn’t “violate” its community standards. Two more people received a similar response upon reporting the page, according to screenshots obtained by the Daily Dot.

Over the last three months, the page received 165 “recommendations” that the Daily Dot reviewed. All 165 of them were negative reviews, with people repeatedly asking the page to be brought down.

“This page is racist!!! Delete this immediately,” one user wrote in February.

“I just want to say to all actual Black people that I tried to report this but Facebook doesn’t care about racism,” another user wrote in March. “They refuse to acknowledge how racist this page is even after me telling them over and over again.”

Facebook said, according to a screenshot shared by Gilmore, it didn’t “go against one of our specific Community Standards,” and requested that she report something “specific” on the page.

Facebook’s community standards include an extensive list of content that could fall under the category of attacks based on one’s identity, so it’s unclear why the social media platform wouldn’t immediately shut down a page featuring blackface, which is so explicitly racist.

Riggins confirmed with the Daily Dot that he reported the page. According to Cook’s post, both Riggins and Cook received a similar response from Facebook.

“We looked over the Page you reported, and though it doesn’t go against one of our specific Community Standards, we understand that the Page or something shared on it may still be offensive to you and others,” the Facebook response said.

“It’s a blatantly racist page, but Mark Zuckerberg says it’s completely within their ‘community standards,'” Swicegood wrote as a review in May.

It’s not clear what specifically people needed to point out about the page that was filled with photos of Black people appearing to be white and Asian wearing blackface, some of them captioned with jokes.

The page displayed a now-debunked photo purporting to show Hillary Clinton in blackface and another 2007 photo of comedian Sarah Silverman wearing blackface in 2007, for which she was recently called out.

“I responded to Facebook about their response and feel that they are so diligent with sexual content but it appears that they approve racial content which, by their actions, feel as if they are racist or complicit to racism,” Gilmore told the Daily Dot in a message. Amid a surge of more people reporting the page, Gilmore reported it again Monday evening.

The page was up until 5pm ET on Tuesday, when the Daily Dot was last able to access it.

Facebook has confirmed it has taken the page down and will be looking into why it took so long for any kind of action, and the Daily Dot will update this report with an update on the platform’s response.

The months-long refusal to take down the page is even more infuriating as it has recently come to light that Facebook repeatedly censors Black voices, especially those who call out racism on the platform. Even those who use snippets of racist encounters where they’re a victim, to raise awareness about an incident, are often suspended from the platform. For a page like “Black Face” to remain on the platform—despite more than 100 complaints—is pure callousness.