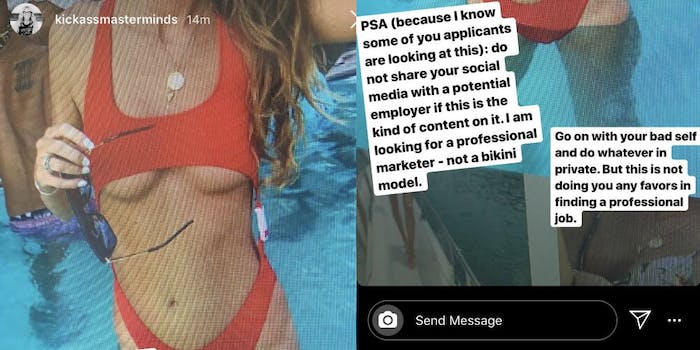 'I am looking for a potential marketer–not a bikini model.'

Kickass Masterminds, an Austin-based marketing company, turned heads after posting an intern applicant’s bikini photo in an attempt to shame her. It is now feeling the wrath of the internet.

“This girl applied for an internship at a company, and they put up this screenshot of her in a bikini on their company Instagram, publicly telling everybody they wouldn’t hire her because of this photo,” @SheRatesDogs tweeted, along with the company’s original post.

This girl applied for an internship at a company, and they put up this screenshot of her in a bikini on their company Instagram, publicly telling everybody they wouldn’t hire her because of this photo. pic.twitter.com/aRQF7CqfSF

Kickass Masterminds’ post began with a “PSA” to prospective interns.

“Do not share your social media with a potential employer if this is the kind of content on it. I am looking for a potential marketer–not a bikini model,” the company wrote. “Go on with your bad self and do whatever in private. But this is not doing you any favors in finding a professional job.”

The tweet quickly went viral, with many calling out the company for harassment and defending the applicant’s choice to post a swimsuit photo on her own social media account.

“I would hope @kickassmasterm is in the process of firing the person who incited harassment and bullying against an internship applicant,” Twitter user @abbygov wrote.

she’s just wearing a BIKINI, it’s not like she’s naked, and even if she was so what? it’s her instagram she can post what she wants

Some commenters were especially perturbed upon noticing that Kickass Masterminds appears to consist of an all-female staff.

“I just checked, the whole company is basically all women, which somehow makes it even worse?” Twitter user @iamsuckeriam pointed out.

I just checked, the whole company is basically all women, which somehow makes it even worse???

Emily Clow, the 24-year-old applicant, told the Daily Dot that she was first attracted to Kickass Masterminds because “it was founded by women,” and she thought it “seemed to support women in business.” She was surprised to see its post after following the company shortly after applying for one of its marketing coordinator jobs.

“I know many women my age have gone through the job application process as I have,” she told the Daily Dot via email. “No one would have expected a potential employer to use their application as an example without their permission, let alone use a bikini picture from social media to deem someone as unprofessional.”

Others on social media pointed out that the company has posted photos of its employees in bathing suits in the past.

“The irony here is that they have a bathing suit photo posted on their ‘professional’ Instagram,” Twitter user @belizmarq wrote.

the irony here is that they have a bathing suit photo posted on their “professional” Instagram pic.twitter.com/h9yQwIe2og

It's clear the real gripe here was, "We're not looking for someone hotter than us."

Twitter users were elated by the company’s decision to disable its account, with many taking credit for running the marketers off of social media.

“It seemed they didn’t believe there would be repercussions for their action,” she said.

The Daily Dot made several attempts to contact Kickass Masterminds but received no response by publication.