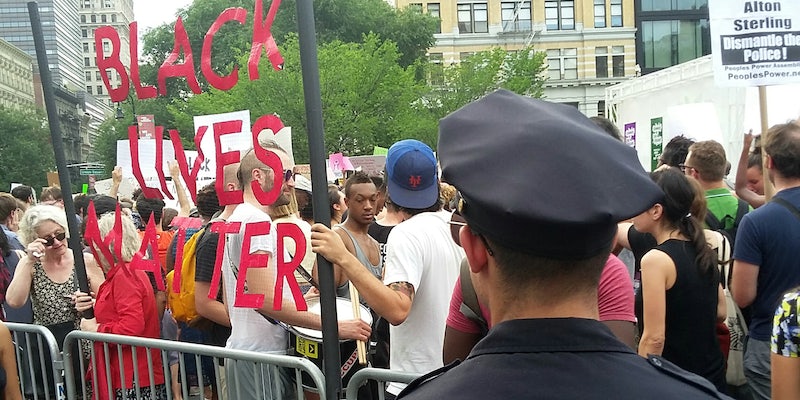 The Memphis scandal is just the latest.

In Spike Lee’s new film BlacKKKlansman, we are reminded that the police and the FBI have been regularly infiltrating Black political organizations for decades. In an internal memo in 1969, FBI head J. Edgar Hoover called the Black Panthers “the greatest threat to internal security of the country.”

While we might like to think that law enforcement’s surveillance of Black activist groups is a thing of the past, little has changed since the FBI set their sites on the Panthers. Little, except, well, technology.

We are seeing advances in surveillance, computing, and social media that allow law enforcement officials an invasive level of access. And it’s clear that they are taking full advantage. In a number of cities across the country, Black Lives Matter (BLM) activists are being targeted and monitored by police. If the invasive tactics we already know about are any indication, there will be even more to come.

On Friday, a Tennessee judge issued a 35-page order confirming that Memphis police violated a 1978 agreement banning spying on protesters; the department had, in fact, conducted a two-year-long program that involved undercover operations and the social media monitoring of BLM protesters.

According to a complaint filed by the ACLU of Tennessee, there is a laundry list of allegations against the Memphis PD, including setting up a blacklist of protestors, creating fake social media accounts, and directing police to turn their attention toward people they have identified as prominent figures in the BLM movement when making arrests at protests.

Some of the actions of the police would be absurd if they weren’t so invasive. In one instance, under a fake account, the Memphis PD posted about radical 1960s author Saul Alinsky and then kept a log of everyone who “liked” the post.

The tactics of the police become less funny when you learn that those who interacted with the fake Facebook page (cleverly named “Bob Smith”) were given priority for arrest during protests.

Officers not only conducted surveillance at BLM events and on BLM social media pages, they also kept tabs on events that were important in the Black community in general, such as a “Black-Owned Food Truck Sunday” and church meetings.

In April of 2017, a Freedom of Information Act request revealed that during the mass protests over the Eric Garner’s death, the New York Police Department was working to infiltrate Black Lives Matter groups in the city. New York police filmed activists, sent undercover personnel to protests, and gained access to private group text messages. NYPD officers were able to pass themselves off as BLM organizers and, in turn, they shared sensitive information about protests with their colleagues. In some instances, they worked their way onto group texts and email threads with as few as seven or eight people.

The Verge published a detailed report specifically regarding video surveillance conducted by NYPD. They found that between 2011 and 2016, there are at least 400 instances in which the New York police filmed protests: Of those, many were BLM events, as the FOIA request that produced these records only included BLM and Occupy actions. More damning: The request that produced the proof of this surveillance did not yield any explicit authorizations for the filming, though authorizations are required per the rules of the NYPD.

Chicago Police have been accused of using a cellphone tracking system to monitor BLM protestors in the Windy City. Jerry Boyle, a volunteer for the National Lawyers Guild, has accused local police of tracking his cellphone during a Martin Luther King Jr. Day rally in 2015.

Boyle is just one of many activists who believe they have been spied on by the Chicago police. His attorneys, Loevy & Loevy, who specialize in bringing cases against the police, believe that the Chicago PD employs an arsenal of tracking devices on protesters.

One of the tools the police are accused of using is called Stingray technology. Stingrays intercept a signal as it goes from a phone to a cell tower by posing as a tower. This technology is also referred to as a cellphone interceptor, and the Chicago Police have acknowledged that they have used them since 2008.

A lawsuit filed in 2017 alleged that the city’s Strategic Intelligence Unit, set up by the DA’s office to gather intelligence on suspected criminals, was tracking the social media activity of local BLM activists throughout 2015. The prosecutor’s office told the unit to cease its investigation, but it allegedly continued to collect data on protesters after being told to stop.

Clarkstown police officers used “geofencing” technology to track activists on Twitter, utilizing tools meant to create targeted advertising to monitor activists’ feeds during specific time frames. An internal report confirmed at least six instances of geofencing conducted by the police. Geofeedia, a company that specializes in geofencing, markets their product directly to law enforcement and, according to the ACLU, has mentioned BLM in their sales pitches.

In Asheville, North Carolina, which has a population of 89,000, the story is much the same. An investigation conducted by the Asheville Citizen-Times found that Asheville Police Chief Tammy Hooper authorized the monitoring of Black Lives Matter and Showing Up for Racial Justice (SURJ) groups. The authorization came as tensions in the city were high following the shooting of Jai “Jerry” Williams, a 35-year-old Black man shot by a white police officer.

The monitoring occurred both online and off. In addition to BLM- and SURJ-affiliated Facebook groups, police also monitored “Asheville Politics” and the activist vegan organization “Direct Action Everywhere.”

Some of the BLM activists thought to be subject to surveillance include local politicians and members of the clergy. One organizer told the Citizen-Times that there is often a police car at the bottom of the street where Ashville BLM President Delores Venable lives.

On the federal level: The FBI

If local police departments in cities you’ve never heard of are spying on BLM, you know the FBI is probably in on it.

The FBI has faced a number of accusations, and made a number of admissions, of spying on Black Lives Matter activists. Following a 2016 FOIA request, the bureau was compelled to release 18 hours of footage of Baltimore BLM actions and protests taken from a spy plane. Earlier that year, James Comey, the then-FBI director, admitted that the same tactic was used in Ferguson.

FBI surveillance of BLM activists is by no means limited to mass spying tactics. Earlier this year, the Intercept reported that the FBI has tracked individual high-profile BLM organizers and utilized confidential informants to infiltrate the movement.

Some of the tactics used by the FBI included tracking an activist as he flew from New York to Ferguson, staking out cars and homes of people associated with BLM, and using informants to identify vehicles belonging to particular activists.

In addition to the tracking and spying conducted by the FBI, the Department of Homeland Security has monitored various social media accounts of BLM activists across platforms including Facebook, Twitter, and Vine. The social media scraping was targeted around specific events—including a vigil commemorating Michael Brown’s death.

We aren’t many years removed from the first massive national Black Lives Matter protests that followed the deaths of Brown and Eric Garner. And we already know that a number of police departments, large and small, across the country, responded to those protests by choosing to spy on Black Lives Matter groups. Not only did they surveil them, but they set up strategies to do so for the foreseeable future.

Given what we know about New York, Chicago, Memphis, Clarkstown, Asheville, and the FBI, we can assume that there are many more police departments across the country that have spied on, and potentially still are surveilling, Black Lives Matter activists.

How many arrests were made as a result of this spying, how much of this surveillance impacted police activity around protests and demonstrations, and how all this monitoring impacted the BLM movement and its members’ personal lives, we may never fully know.

It’s a safe bet that just as we are still uncovering the whole truth of law enforcement’s relationship to the Black Panthers, we will still be learning about police attempts to infiltrate BLM years from now.