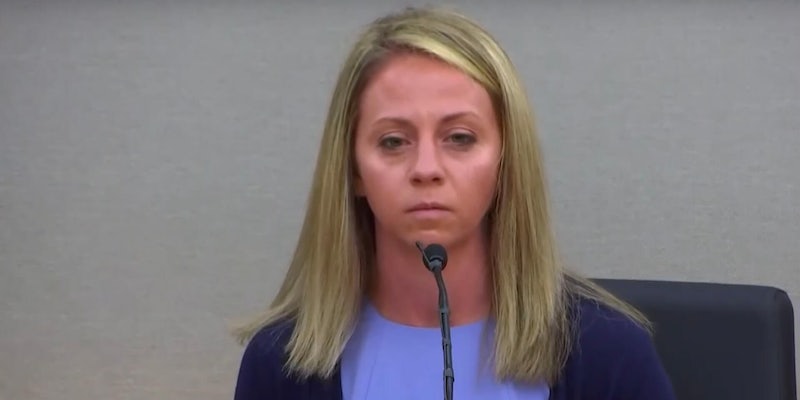 Guyger is still the exception, not the rule.

As Black people, we are told all the time what to do if we’re stopped by police. Don’t make any sudden movements. Don’t talk back. Don’t give them a reason to shoot you. No matter how well-intended this advice, if you’re Black in America, you might be reported to the police for having a BBQ with your family. You can be shot seven times during a traffic stop for admitting to having a licensed firearm, choked to death for smoking a pack of cigarettes, or killed for standing in your home as an off-duty officer walks in.

On Wednesday, Amber Guyger, an off-duty Dallas patrol officer who walked into the apartment of a Black man named Botham Jean and shot him to death, was sentenced to 10 years in prison for murder. Some may hail Guyger’s guilty verdict as a sign of justice. But research, like that done by professor Philip Stinson of Bowling Green State University, shows the outcome for Guyger is an exception, not the rule. From 2005 to 2017, only 35% of police officers arrested on murder or manslaughters charges were actually convicted. Stinson notes that roughly 60% of crimes that police are arrested for occur while they’re off-duty.

In cases where police officers are found not-guilty of murder or manslaughter, the police and their departments control the narrative around the crime. This phenomenon is called “the blue wall of silence.” Local prosecutors bar police accountability because they are elected officials and have their own political motivations. Bob McCulloch, for example, was the lead prosecutor in the Michael Brown murder case—and the son of a police officer slain by a Black man.

The bias in Amber Guyger’s case was evident. After interviewing Guyger, the case’s lead homicide investigator, David Armstrong, noted that he didn’t believe that she committed a crime. Police made public that they found marijuana in Jean’s apartment after the murder, a clear attempt to criminalize the victim. And in the end, Guyger’s defense team tried to paint her murder as “tragic, but innocent,” a characterization not given to Black people who die at the hands of white police officers.

In a country founded on the enslavement of Black bodies and now dependent on the disproportionate imprisonment of Black bodies, the criminal justice system necessitates that Black bodies are considered to be born criminal, violent, or incapable of innocence. Scholar Jackie Wang explained this in an interview in the feminist journal Lies: “Not only are Black men assumed guilty until proven innocent, Blackness itself is considered synonymous with guilt,” Wang said.

Under society’s twisted logic, Trayvon Martin, the 17-year old Black teen murdered by a neighborhood vigilante in 2012 was a Black thug and not a boy who saved his father from burning apartment when he was 9. Sandra Bland, a Black woman who died in police custody after a traffic stop in Waller County in July 2015, was reported to have marijuana in her system while the history of racist violence in Waller County was largely ignored. Tamir Rice was a Black boy yielding a gun in a park and not a child worth more than two seconds of consideration before officers started shooting.

Although we can breathe a momentary sigh of relief because Amber Guyger has been found guilty and sentenced to prison for a crime that she did commit, we must stay committed to critiquing the criminal justice system that has allowed police officers to kill 678 people so far in 2019. We must move beyond reforms, like body cameras or independent review boards after police murders, and toward a political movement that upends the racist roots of the criminal justice system. And we must move toward a future beyond police and prisons.