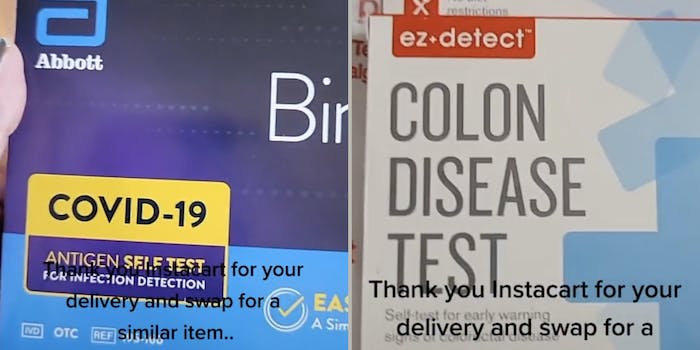 ‘We rather give a bad replacement than a refund’: TikToker shows ‘similar item’ Instacart used to replace out-of-stock COVID test

One TikToker ordered an at-home COVID test on Instacart and instead received a colon disease test, sparking debate about the delivery service’s item replacement policy.

TikToker Donna (@donnase5) posted a video of the colon disease test she received from Instacart. In the comments, Donna explains that the app never notified her that COVID tests were out of stock. Instacart eventually refunded her, she later commented. Donna’s video now has over 800,000 views.

Instacart is a grocery delivery service similar to DoorDash and other food delivery apps. Customers order items on the website or app, and Instacart shoppers go to the store, find the items, and drop them off.

When an item isn’t available, shoppers are instructed to find the “best possible replacement,” according to the Instacart website. Customers can also list their own specific replacements or request a refund. But if a customer doesn’t select their preferences ahead of time, the app defaults to finding a replacement.

The response to Donna’s video was mixed. Some were critical of the Instacart shopper.

“I am pretty sure they could have messaged her and told her it was out of stock rather than pick something that was not relatable to what she was buying,” one commenter wrote. “Instead of wasting one’s money and time.”

Others explained that the Instacart shopper was probably just following instructions.

“My manager sent a message last week saying ‘We rather give a bad replacement than a refund,’” one commenter, who says they are a shopper for Instacart, wrote.

“If the shopper can’t complete the order they get paid basically nothing,” another user wrote.

Instacart has come under fire recently for poor working conditions. Shoppers say that the company’s rating system is harmful. A “wrong” order, like the one in Donna’s TikTok, could lead to a bad review and a steep pay cut.

The company also offers no hazard pay to shoppers, ignoring workers’ demands since the start of the pandemic. A collective of Instacart workers is urging customers to delete the app.

The Daily Dot has reached out to Donna via TikTok and to Instacart via email.