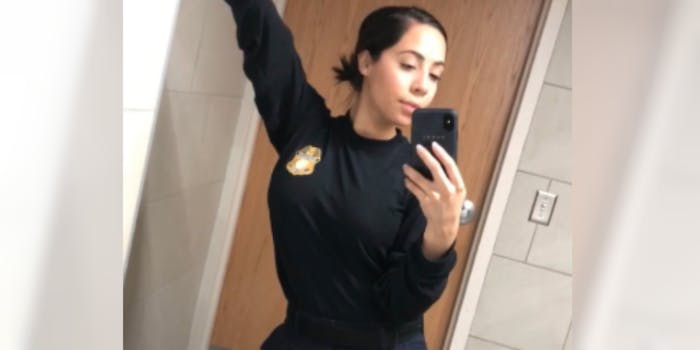 There's a new twist to the #ICEBae saga.

There’s a new twist to the #ICEBae saga: The viral sensation is a registered Democrat in Texas, according to the New York Post.

A woman reportedly named Kiara Cervantes became a controversial, overnight sensation for being attractive and reportedly a Border Patrol officer, according to Yahoo. A photo of Cervantes was taken during Mike Pence’s visit to a border detention facility while she was on duty. The photo later circulated online under the hashtag #ICEBae.

“I think I’m coming down with a case of undocumentation,” one Twitter fan wrote.

The attention she received prompted #ICEBae to finally come forward. A person created a Twitter profile on Monday, claiming to be Cervantes, the ICE bae. She later posted a video to prove she was the real deal.

“Just woke up … saw that I needed to make a video so y’all could believe that it’s me,” said the woman claiming to be ICE bae. “It’s me—I’m a Customs officer based in Texas and yeah, I don’t know what else to say.”

Cervantes also wrote that she was in “awe” of all of the support.

Even though some of ICE bae’s reception has been positive, many are criticizing Cervantes for working for the Border Patrol, which is currently under serious scrutiny for its mistreatment of immigrants.

“This country is a mess, we are praising and trending #IceBae when she is literally a guard at a CONCENTRATION CAMP, guarding CHILDREN IN CAGES, RIPPING FAMILIES APART AT THE BORDER,” one user wrote. “you’re all sick, honestly.”

Another likened her work as a Border Patrol officer to being Nazi.

One user called her “literal scum” and told her that she should be ashamed of her job, especially as a Latina–adding that her parents should disown her.

“I think that’s really rude and naive of you to say. You have no idea who my parents are and no idea what goes into my job on a daily basis… before speaking on something you know nothing about…. DONT. Regardless I’m blessed and thankful for the career I have,” Cervantes wrote in a now-deleted response.

Prior to the revelation of Cervantes’ political party affiliation, it was assumed that her politics weren’t in line with those of a Democrat.

The internet has a ton of questions for ICE bae, and they are all waiting for answers. Some of those answers may be coming soon.

“Video coming soooon! I have some thing to get off my chest!!” she wrote.

Video coming soooon! I have some things to get off my chest!! ☺️❤️