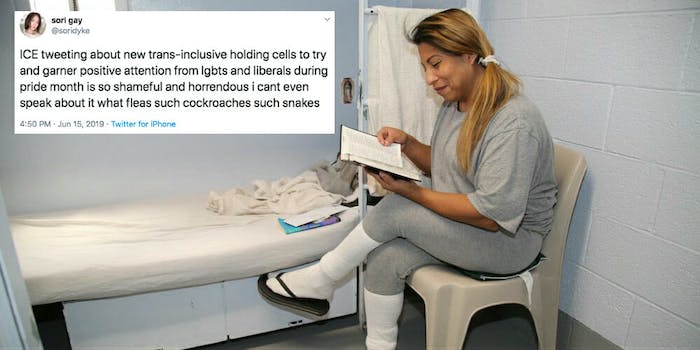 People are not falling for these ICE ‘propaganda’ photos

U.S. Immigration and Customs Enforcement (ICE) tried to depict a happy and healthy image of detention centers–where thousands of migrants continue to be held. Many are now calling ICE out for pushing propaganda.

On Thursday, ICE posted a string of photos from the Cibola County Correctional Center in New Mexico, a detention center that opened a separate section for transgender women in 2017.

The thread depicts high-quality photos of inmates smiling while reading or engaging in recreational activities, such as gardening and playing basketball.

“ICE is committed to upholding an immigration detention system that prioritizes the health, safety, and welfare of all of those in our care in custody, including LGBTI individuals,” read one of the tweets in the thread.

The irony of ICE touting a trans-friendly environment, especially during Pride, was infuriating to many. The safety of trans immigrants who are detained has come under increased scrutiny in the past few weeks.

On June 1, the second trans woman–within a year–died while in ICE custody.

Many immediately called out the photos as propaganda by an institution that has been mired in reports of controversial arrests, inhumane detention conditions, and deaths of at least five migrant children–all since President Donald Trump took office.

ICE detention centers have been compared to concentration camps in the past, and its effort to advertise one of its facilities as a happy and healthy place immediately drew comparisons to Nazi propaganda.

In a detailed Twitter thread, one user made the comparison by using the example of the Theresienstadt camp in Czechoslovakia.

In 1944, Nazis made the infamous Theresienstadt film in an effort to show the International Red Cross that they were not abusing Jewish people in concentration camps. The film is one of the most notorious Nazi propaganda efforts. According to clips shown by the U.S. Holocaust Memorial and Museum, the film includes accounts of children playing, library access, sports facilities—all eerily similar to the images ICE is now sharing on Twitter.

It was a huge lie.

And so is this thread.

This thread is nothing more than NAZI propaganda.

ICE should be disbanded.

It's been a couple years since I've visited the @HolocaustMuseum, but I bet they have some thoughts about this level of propaganda..

They have seen it before.

The Twitter thread came on the heels of news that more than 5,000 migrants have been quarantined after being exposed to mumps and chicken pox.