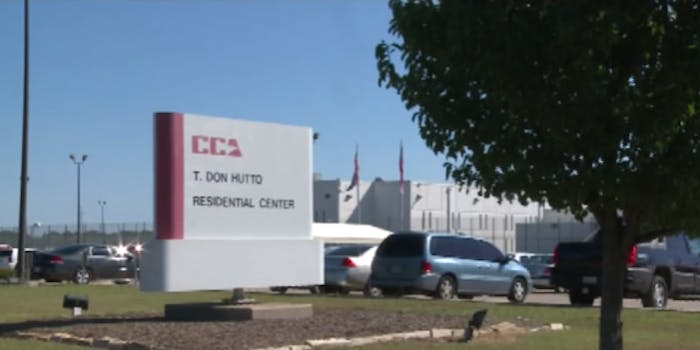 She was reportedly isolated for 60 hours.

A 23-year-old Salvadoran woman detained by ICE has been moved to solitary confinement after accusing one of the guards of sexual assault.

Asylum seeker Laura Monterrosa has been held since last May at the T. Don Hutto Residential Center in Texas, a privately owned prison rather than a state or federal facility. As the Independent detailed earlier this week, the 23-year-old has claimed she was sexually assaulted by one of the guards at the facility. Subsequently, she’s been placed in solitary confinement, in what advocates say is an act of retribution and intimidation intended to force her to recant the abuse claims.

We first reported on this story earlier this month, when Laura Monterrosa came forward with her allegations of repeated sexual assault by a female guard at Hutto: https://t.co/3rfJGANj8l

Last month, Monterrosa attempted suicide after she was forced to eat in the same cafeteria as the guard she says assaulted her. She survived the attempt, but in the weeks following, she’s claimed the jail has taken punitive and inhumane steps to try to force her to change her story.

“I feel very desperate because I tried to report the abuse from ICE and facility officials, but they continue to psychologically abuse me through intimidation,” Monterrosa said in a statement last month following her attempted suicide: “I do not feel safe or secure. I am not receiving the medical treatment or help I need.”

We are here at Hutto Detention Center demanding to visit with Laura Monterrosa, victim of sexual abuse in detention who has been threatened and punished by @ICEgov and @CoreCivic for speaking out. She was held in solitary confinement for 60 hours this weekend. #EllaHabla pic.twitter.com/5qzN9kwBWX

Bethany Carson of Grassroots Leadership, an activist group that’s been working with Monterrosa, confirmed to the Guardian this week that Monterrosa was recently isolated from other inmates for 60 hours.

“They were pressuring her to write a letter to them recanting her testimony but she has not done that,” Carson said. “She is remaining strong and we’re out here showing her that we support her and we’re not going to stand for a victim of sexual abuse being intimidated in this way.”

Since President Donald Trump took office last year, overall deportations of immigrants have actually ticked downward, albeit very slightly. But overall ICE arrests have risen, and as increasingly more people are jailed by the agency, allegations of human rights violations and abuses have been on the rise. Many prison reform advocates and experts believe solitary confinement to be a form of torture, and the United Nations has called on the U.S. to halt its usage. Nevertheless, it is still a common practice in the American prison system.