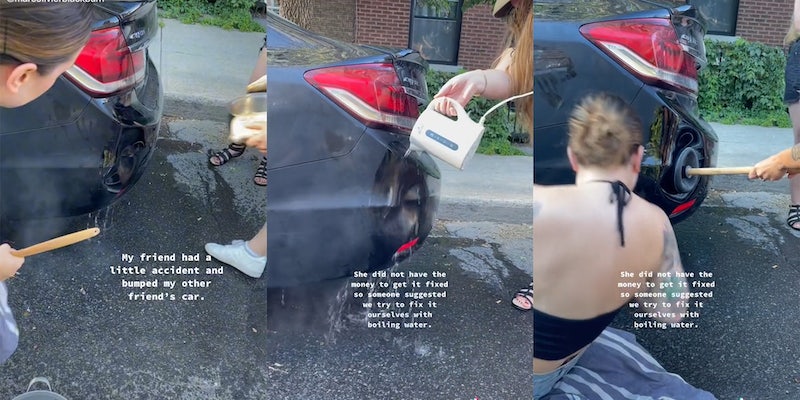 ‘Goes to show how people get overcharged for repairs’: TikTokers share hack to get dent out of car

'THIS WHOLE TIME I COULD HAVE DONE THIS?!'

How does one get a soft dent out of a car? According to a now-viral TikTok, all it takes is boiling water, a plunger, and an enthusiastic friend group.

In a video with over 20 million views, Montreal-based user Marc-Olivier (@marcolivierblackburn) shows his friend’s car, which has a dent in its bumper. The dent is a soft dent, meaning it has no hard edges or creases.

“My friend had a little accident and bumped my other friend’s car,” Marc-Olivier wrote in the text overlaying the video. “She did not have the money to get it fixed so someone suggested we try to fix it ourselves with boiling water.”

The video goes on to show the group doing just that. Someone pours boiling water from a kettle over the dent to soften it. After a few moments, one friend comes in with a plunger while another tries to push the dent in from the opposite side. With a few seconds of effort, the dent gives way, causing the group to celebrate.

The “boiling water trick” is a relatively well-known hack for car owners with minor dents in their fenders.

“Using DIY options like pouring hot water over the dent to fix it is popular because it is inexpensive and doesn’t require so many complex pieces of equipment,” explains auto blog Car Detailing Planet. “When you pour boiling hot water over plastic, the plastic becomes hot and more malleable. Since thermoplastics can be reshaped easily in this state, it becomes pretty easy for one person to fix the car dent quickly.”

In comments, many users celebrated the achievement alongside the people in the video.

“The pure joy in this is unreal,” a second added.

“What a victory,” a third shared. “I was so happy watching this.”

Some noted how expensive the fix could have been had the group gone to an auto mechanic.

“Excellent work, but goes to show how people get overcharged for repairs,” a commenter claimed.

“Y’all literally just saved hundreds, if not thousands of dollars. Well done!” another congratulated. (This estimate is accurate, according to Dings ‘N’ Things Collision.)

However, some reminded users that, if they are going to try this at home, they might want to consider exercising a few more safety precautions than the people in the video.

“But can we talk about the girl putting her bare hand under the dripping BOILING water?!!” exclaimed a commenter.

“The boiling water in open toed shoes was brave,” a further TikToker stated.

The Daily Dot reached out to Marc-Olivier via Instagram direct message.