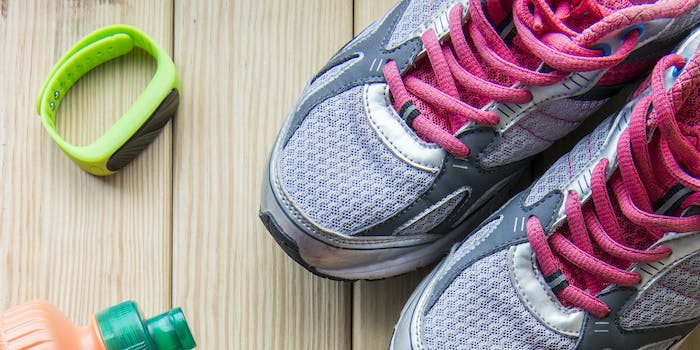 The surprising number of steps you should walk a day

Get ready to set those pedometers.

The wearables industry might be losing market share and Fitbit might not actually be the future of how to measure your fitness, but that doesn’t mean counting the number of steps you take per day is a fad that’s going to stop for a breather anytime soon.

People will still strap on a Fitbit or an Apple Watch and go about their day, counting each step in a continued quest for getting healthy (or so they can annoyingly show everybody in their path just how many steps they took that day).

But if you are looking to lose weight or just to maintain a healthy lifestyle, it makes sense to count your steps by using some kind of pedometer. But how many steps do you actually need per day to be a healthy human?

The easy answer is 10,000 steps. That’s the initial goal when you open that Fitbit box, and it’s become the standard benchmark when talking about how many steps a day people should walk.

But according to Live Science, the 10,000-step benchmark is basically an arbitrary number. Catrine Tudor-Locke, the director of the Walking Behavior Laboratory in Baton Rouge, Louisiana, told the website that pedometers sold in Japan during the 1960s were marketed as “manpo-kei.” The English transition for that phrase is “10,000 steps meter.” The moniker has stuck ever since.

Now, when you first unseal that Fitbit box, the initial goal continues to be 10,000. The Centers for Disease Control doesn’t necessarily recommend 10,000 steps, however. Instead, the CDC says adults should get at least 150 minutes of moderate-intensity physical activity or 75 minutes of vigorous-intensity activity per week. As Tudor-Locke told Live Science, that’s the equivalent of walking between 7,000-8,000 steps a day.

But clearly, the more steps you walk, the better it is for you—particularly since, according to Humana, most Americans get somewhere in the 6,000-step range daily (although other estimates place it closer to 3,000 steps). That’s why 10,000 steps—which typically is a little less than five miles but translates to about 90 minutes of activity per day—is definitely a good place to start.

However, a new study by the International Journal of Obesity, as reported by the New York Times, claims many more steps might be needed. In a study of mail carriers in Glasgow, Scotland, who mostly walk their routes and earn about 15,000 steps per day, researchers found they had smaller body mass indexes, smaller waistlines, and better metabolic profiles than their postal colleagues who spend most of their working day sitting.

Either way, the pedometer can help. According to a Stanford University School of Medicine study from 2007, using a pedometer motivates the user to walk more often and can help people lose weight and lower their blood pressure. In fact, those pedometer users were shown to have walked more about 2,000 steps more (or about a mile more) per day. According to Stanford, that’s a 27 percent increase in physical activity for average Americans.

If you’re completely inactive, a part of the crowd walking less than 3,000 per day, for instance, 10,000 might sound like having to climb a mountain every 24 hours. Yet, just doing anything extra can set you on the path toward better health (or at least, be the first step on that path).

In summarizing this American Journal of Clinical Nutrition study, New York magazine notes, “Going from no exercise to walking briskly for 20 minutes a day … the researchers showed that, holding everything else equal, doing so brought with it a 20–30 percent reduction in overall mortality risk.”

Or, as the Mayo Clinic suggests, take this three-pronged approach after you set up your fitness tracker:

So, how much should you be walking per day?

The conclusion is still about 10,000 steps, but in reality, it’s a fluid number. You don’t have to walk that many if you don’t want to because remember, 10,000 steps is just a made up number to sell 50-year-old Japanese pedometers. But, for your own health, well, it’s not a bad idea to do it anyway.