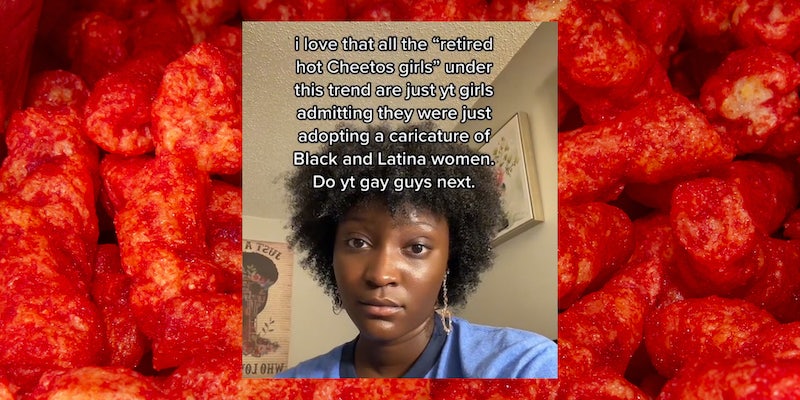 ‘All they do is play into harmful stereotypes’: TikTok torn asunder over ‘Hot Cheetos Girl’ trend

'These stereotypes still plague a lot of us, and it's exacerbated when white girls adopt this caricature of us because it's inauthentic ... It's an act.'

A recent TikTok trend that pokes fun at a specific style has been exposed by creators of color as appropriative and racist.

The trend, called “retired hot cheetos girl,” features women—mostly white—reminiscing and denouncing a phase of their life wherein they sported a specific look. The phrase is based on photos shown by white female TikTokers, like @user777asf whose video has almost 8 million views and @beau.seipler whose TikTok garnered over a million views.

According to the creators, being a “hot cheetos girl” involves slicking back one’s hair, wearing large hoop earrings, having long acrylic nails, and laying one’s edges (or baby hairs).

Both viral videos begin the same: The TikTokers are shown with blonde hair and smiling.

In her analysis of the trend, TikToker @meeandminnie explains that the “hot cheeto girl” aesthetic is one that originated in Black and brown communities and that the trend “demonizes” the style.

What’s more, the TikToker says that saying one is “retired” from wearing a “clean face, slicked back hair, glossed lips with gold jewelry” makes the statement that the look is wrong, unattractive, or out of style.

“This trend of white women shedding themselves of this aesthetic will do nothing but further demonize the women in communities of color who continue to wear it,” @meeandminnie says.

TikToker Jordan Simone made a video about the “hot cheeto girl” trend as well. In it, she says that white women are making a “caricature of Black and Latina women”—and that white gay men are guilty of doing so, as well.

In an interview with the Daily Dot, Simone said that historically there have been consequences for women of color who dress in the aesthetic in question, like being denied jobs, considered unprofessional, and stereotyped as “ghetto.”

“These stereotypes still plague a lot of us, and it’s exacerbated when white girls adopt this caricature of us because it’s inauthentic,” Simone told the Daily Dot in an email. “It’s an act.”

To Simone’s point, TikToker @_.cha.nel said in her video about the trend that white women “return” to their whiteness (or stop dressing like a “hot cheeto girl”) when it’s time to “get big girl jobs.”

This is certainly not the first time Black and Latina women have pointed out that white women attempt to look like them and/or use a Blaccent.

In her video about the “hot cheetos girl” trend, TikToker @sallistarr says that white women have been “[cosplaying]” as women of color for years when they want to feel “different.” However, all they do is play into “harmful stereotypes,” @sallistarr says.

“[And then white women] ‘grow out of it’ and go back to Lululemon and dating Chad in DPhi,” @sallistarr wrote in her TikTok’s overlay text. “Y’all always acted like [women of color] were crazy [for calling it out].”