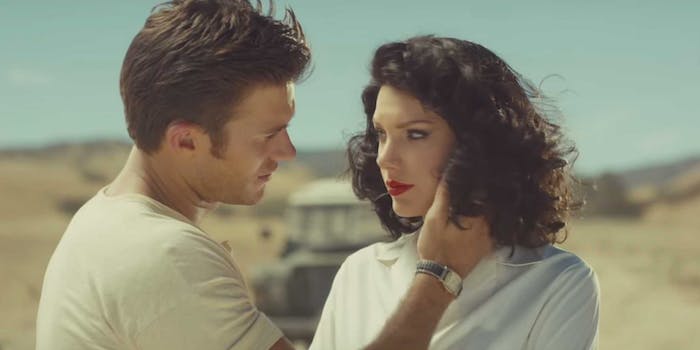 It was very 'Out of Africa'—including the 'No Africans' part.

If you’re going to pay tribute to a Meryl Streep movie, Out of Africa is an undoubtedly odd choice. Very loosely based on Isak Dinesen’s autobiographical novel about a woman in a “marriage of convenience” who begins an affair with a local hunter (Robert Redford), OOA had its Crash moment in 1986, winning seven Academy Awards, including Best Picture. The problem is that it’s not very good—in fact, it’s widely remembered as one of the worst movies to take home top honors at the ceremony. If you’re going to get your Streep on, why not Silkwood or The Devil Wears Prada? The French Lieutenant’s Woman? Even a Mamma Mia tribute would make for a good drinking game.

An homage to a love triangle about white colonialists is going to present some, uh, challenges to an artist who just wants to make a three-minute music video to put on her VEVO page—and Taylor Swift found that out the hard way. The singer debuted her vid for “Wildest Dreams” at the VMAs Sunday night, and even the most casual observer would have noticed that—for a clip that’s set in Africa—it’s about as white as a Sunday morning farmer’s market. Featuring Scott Eastwood (son to Clint), the video wants to have its old-school Hollywood romance but ends up eating some old-school Hollywood racism, too. And it’s sadly indicative of its star’s own shoddy racial politics.

In a recent essay for Refinery29, Lauren Le Vine referred to Taylor Swift’s music videos as “timeless fantasies,” and there’s apparently nothing more timeless than white colonialism. From Swift’s dark, Streep-esque black hair to its Fitzgerald-goes-on-safari costuming and Instagram-ready savannah backdrop, the video is both stunning and stunningly tone-deaf. As the Huffington Post’s Lauren Duca writes, “instead of the cultural appropriation that has become almost status quo in today’s pop music, Swift has opted for the bolder option of actually just embodying the political exploitation of a region and its people.” Duca really hits the nail on the head here: Just because you represent the past or pay respect to it doesn’t mean you need to recreate its worst aspects.

However, this isn’t the first time Swift has been accused of “accidental racism“ in her work. After her video for “Shake It Off” debuted last August, rapper Earl Sweatshirt accused the singer of “perpetuating black stereotypes,” especially in a segment where Swift dressed up in gold chains and hoop earrings while sliding underneath the legs of a twerking black woman.

The Pitchfork Review’s senior editor Jessica Hopper argued it was even worse than a similar moment in Miley Cyrus’ “We Can’t Stop.” “Miley used women of color as props, but her appropriation was participatory,” Hopper wrote. “In a strange way, her dancing with them is maybe a modicum ‘better’ than Taylor tunneling out from underneath these legs and looking up with this smirk, like ‘Isn’t this wacky? I don’t even understand?’”

As Chris Osterndorf pointed out last year in an op-ed for the Daily Dot, this is a music problem as much as it is a Taylor Swift problem, as musicians—especially female pop stars—often struggle to appreciate other cultures without stepping over the line. From Selena Gomez’ bindi and Pharrell’s Native American headdress to whatever was going on in Avril Lavigne’s “Hello Kitty” video, being a humble, respectful guest in someone else’s culture is difficult, and many continue to get it wrong. To an extent, appropriation is also the history of rock music itself, which borrowed elements of blues from black musicians for the profit of white artists.

Just because you represent the past or pay respect to it doesn’t mean you need to recreate its worst aspects.

But it’s this erasure that’s becoming a problem in Taylor Swift’s music—and her budding politics. Two years after publicly disavowing the label, Swift officially came out as a feminist in 2014, and in her VMAs speech last night, accepting Video of the Year for “Bad Blood,” she injected some girl power. Swift said, “There’s been a lot of discussion about this video and what it means, but I’m just happy that in 2015, we live in a world where boys can play princesses and girls can play soldiers.”

It was a nice moment from a star whose worldview is evolving, but her recent Twitter spat with Nicki Minaj pointed out its limits: Swift infamously erased the hip-hop star’s critique about racism, choosing instead to tone-police her and preach female solidarity instead. The Huffington Post’s Zena Blay referred to it as “peak white feminism,” an unfortunate phenomenon of using issues of gender to erase systemic racial discrimination.

After the VMA nominations were announced in July, Minaj took to the social media platform to complain about her snub for “Anaconda”—which was left out of the “Video of the Year” race, despite becoming an inescapable cultural force—pointing out, “If your video celebrates women with very slim bodies, you will be nominated for vid of the year.” Swift responded on Twitter, “I’ve done nothing but love & support you. It’s unlike you to pit women against each other.”

They publicly made up and Swift even came out to join Nicki Minaj last night during the show’s opener, a performance of Minaj’s “The Night Is Still Young.” The two embraced on stage, and while it seemed to bury the hatchet, it was pulled out of the ground later in the evening. During her aforementioned VMAs speech, the “Bad Blood” squad joined her on stage—including Hailee Steinfeld, Cara Delevingne, and Mariska Hargitay—but one person was conspicuously missing: Nicki Minaj. During their Twitter exchange, Swift promised Minaj: “If I win, please come up with me!! You’re invited to any stage I’m ever on.” She also failed to get a mention in Swift’s speech.

The difference here is crucial: Swift instead got an invite to Nicki Minaj’s stage. Thus, it seems that Taylor Swift is still having trouble making room for people of color on her own platform—whether her overwhelmingly white friend group, that’s in her music videos, or her version of solidarity. Swift has recently made her name on empowering young women, but she needs to rethink her definition of what empowerment means—and who it leaves out.

As punk singer Kathleen Hanna of Bikini Kill recently pointed out, her continued engagement matters to her millions of fans that follow her every move. “When somebody that’s a huge megastar that has so many young fans, like Taylor Swift or Miley Cyrus or Beyoncé, comes out and says, ‘I’m a feminist,’ I mean, that’s the sound of hundreds of thousands of girls typing the word into the Internet,” Hanna said. That’s incredible cultural influence, and it’s important for her feminism to continue to evolve—by making mistakes, learning from them, and striving to show that she’s doing the work of inclusivity.

While it’s admirable and awesome that Swift has showed up to the party, it would be nice if everyone else at Swift’s party didn’t look exactly like her. Just because Taylor Swift’s videos are out of Africa doesn’t mean her politics have to be, too.