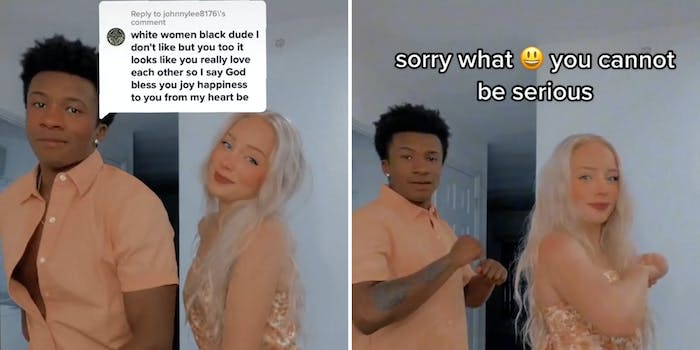 Couple in interracial marriage dances to some of the racist comments they get, showcasing modern-day racism on TikTok

An interracial married couple on TikTok is showcasing the racism they experience every day by dancing to racially charged comments left on their videos.

Clara and Trey (@claraandtrey), have a TikTok account with about 528,000 followers where they document their lives as a young, married interracial couple. Clara is white and 18 years old, and Trey is Black and 21 years old.

Like many influencers who share their relationships on social media, Clara and Trey have faced some backlash from viewers, primarily racist comments about their interracial relationship.

In a recent TikTok video, the two danced in reply to one such comment.

“White [woman] black dude I don’t like but you [two] it looks like you really love each other so I say God bless you joy happiness to you from my heart be,” the comment read.

Viewers were appalled by the comment and said the commenter exposed themself as racist.

“they really just openly said they were racist,” one viewer commented on the video.

“People who comment these type of things need therapy,” another viewer commented.

Other viewers said they don’t understand the racist thought process.

“How do people actually think like this,” one user said.

“i have no idea why skin color could ever matter in a relationship,” another user wrote.

This video wasn’t the first time Clara and Trey made fun of rude or racist comments, though.

Another video shows the two dancing in reply to a comment addressed to Clara: “this Blondie got daddy issues”

The Daily Dot reached out to Clara and Trey via TikTok comment.