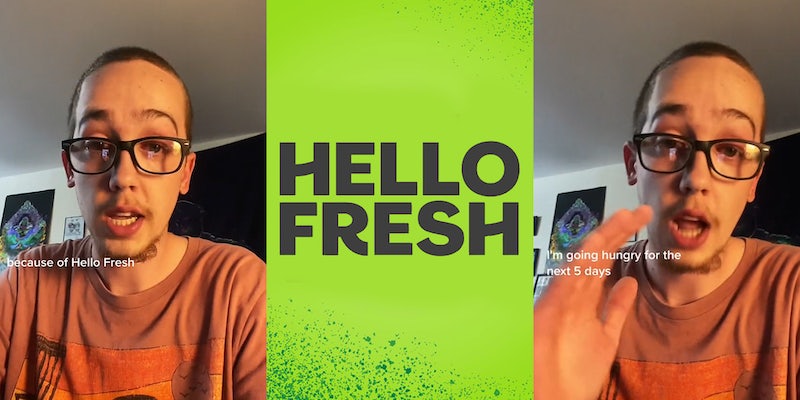 ‘I’m not eating for 5 days because of HelloFresh’: Man says he spent the last of his money on HelloFresh box—then his order was delayed

A TikToker named Seth (@londonbridgeisfalling) posted a now-viral clip where he blasts HelloFresh for not sending the food he ordered from their company in a timely fashion.

He received some blowback from commenters who claimed her was over-dramatizing the situation as Seth claimed he was “going hungry” as a result of their failure to deliver on the initial date as promised. This sparked a debate in the comments section where other users criticized HelloFresh and shared their own negative experiences with the company.

“Because of HelloFresh I’m going hungry for the next 5 days,” Seth says in the video.

He explains that he decided to order a box from meal kit company HelloFresh, “because groceries are getting way too expensive and the economy sucks.” After using a discount to purchase his first box, Seth says the order was supposed to be delivered Monday.

“Me not having very much money, [I] decided I’m not gonna buy more groceries, I have enough to last me until Monday,” he says. “Well, yesterday was Monday and my box was supposed to come. It didn’t. I checked the fucking tracking, and it tells me oh there’s a road closed in your area.”

This is where the TikToker takes a beat, presumably to emphasize his dissatisfaction with this justification for his order being delayed, “There’s more than one way to get to my house. There isn’t just one road. So I talked to customer service and they told me it was a weather condition well that struck me as funny because…”

He then flips his smartphone’s camera around to show what the current weather conditions outside were. Viewers were presented with clear skies and the kind of scene that makes you want to call out of work to enjoy a hike with some friends. “It’s a sunny day completely clear everywhere within a hundred square miles of me,” he says.

Seth continues, “They end up chalking it up to their mistake so they say, ‘oh rest assured your box will be delivered tomorrow, and we’ll issue a full refund for your first box because of the delay.'”

At the time, the TikToker said this was a satisfactory reaction. The company owned up to their mistake and they demonstrated that they wanted to make things right with him. “I’ll have to suffer today, and be hungry for a day, but you know I can do it because I’m looking forward to the meals that I got,” he says.

However, he says HelloFresh fumbled his order yet again. He claims his order was not out for delivery, it was instead split into two orders with separate tracking numbers.

“So this, you know, instant red flag, I call customer service,” Seth recalls. “Customer service tells me, ‘oh yeah, I see here on your account that there was a mistake with your box, and they ended up having to repackage it.’ OK, so now there’s three excuses: construction, weather, mistake with the box. I’m thoroughly confused at this point.”

Seth says he then asked the customer service rep for help, noting that though he was refunded his money, he wouldn’t receive it for “5-10 business days.” However, she was unable to help, and the TikToker requested to speak to the manager—who couldn’t do more than tell him where his box was.

He claims this made him doubt that he could reliably use HelloFresh to ensure that he will have food at his house. “The manager tells me that my box isn’t gonna be delivered until Friday,” he says. “I haven’t eaten since Monday morning. So I’m gonna go hungry until Friday. Because I spent the last of my money on this box I don’t have any more groceries in my house to eat…”

He closed out his rant against HelloFresh in a follow-up clip. “They say they can’t send any money to a venmo, to my email, they can’t do anything like that so I can actually eat because again my money is processing and I’m not gonna get it for 5 days um yeah, so I’m gonna do a little fast for 5 days,” he concludes. “Thanks HelloFresh.”

In response to his videos, many commenters shared that they too had negative experiences with HelloFresh, stating that they’ve received spoiled food in the mail and that the company continued to charge them even after they canceled their orders with the delivery service. Others pointed to a September 2022 food recall for possible E.Coli contamination with some of the company’s beef products they sent to customers.

“Don’t…. Hello fresh was good for the first few weeks. Then after that meat and everything spoiled within one day,” one viewer said.

Several users remarked that while the initial discount codes and promotions made getting meals from the brand an affordable option, the service became much less financially viable after those savings were no longer available.

However, many other viewers couldn’t understand how Seth had the money on hand for a “luxury” service and not actual groceries. Some remarked that if he was so strapped for cash then he should visit local food banks or reach out to neighbors and explain his situation to help himself scrape by until his delivery arrived.

“if you got hello fresh money how do you not have other food…like does he only ever keep the exact amount of food he needs for the week at his house,” one user wrote.

Seth addressed these comments in an additional video stating that while he did have some food in his house, like crackers, oatmeal, some flour, spices, and some milk, he was planning on having full meals for himself and his wife. He adds that the reason why he decided to try the food service is because he “isn’t the best” when it comes to budgeting while at the grocery store. Seeing how the company arranged the meals, he claims it actually came out cheaper for him and his spouse to use the meal delivery service to ensure that they had healthy meals.

On Thursday, Seth says he finally received his order in an additional video. Unboxing the package on TikTok, he claims the ice packs were completely melted and that the proteins all had liquid in the packaging. After seeing what the contents of the shrimp, chicken, and beef in his HelloFresh delivery looked like, other TikTokers urged Seth to toss them out.

“HelloFresh sent me rotten shrimp,” he wrote in the caption. “Its a bummer because I was actually excited to try some good meals but this just taints every good thought I had about them.”

The Daily Dot has reached out to Seth via TikTok comment and HelloFresh via email for more information.