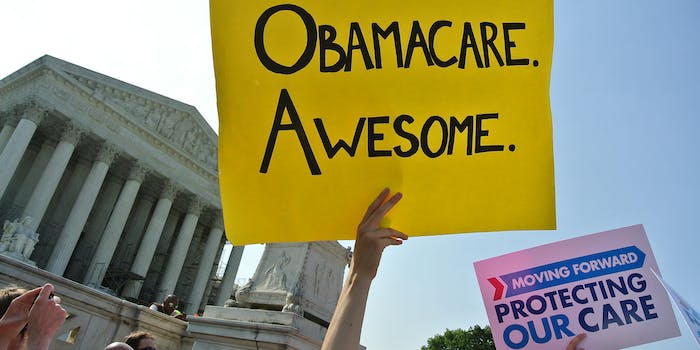 Photo via Will O'Neill/Flickr (CC-BY)

Healthcare.gov will be a lot less accessible during Obamacare open enrollment

The Donald Trump administration said Healthcare.gov—the official site to enroll in Affordable Care Act-approved health insurance—will be down for maintenance for 12 hours every Sunday in the middle of open enrollment season.

This year’s open enrollment season—the one time of the year individuals can enroll in new health insurance—is Nov. 1-Dec. 15. The 45-day period to enroll is significantly shorter than last year, when individuals had three months to enroll.

Several health professionals, including Phil Galewitz of Kaiser Health News, tweeted on Friday that the Department of Health and Human Services announced the planned outages for routine maintenance.

..@HHSGov plans to shut down @HHSGov for 12 hours during all but one Sunday during the upcoming 6 week open enrollment season pic.twitter.com/0d5WUtLc9G

Many individuals—including Andy Slavitt, former acting administrator of the Centers for Medicare and Medicaid Services under Barack Obama—see the planned website outages as sabotage against the Affordable Care Act.

And now cuts it further. https://t.co/0SeR4mlCz2

When Trump came in, https://t.co/7qbUAqdrC8 was in its best shape yet. No excuse to have 7% scheduled downtime. https://t.co/MJP0OfHccS pic.twitter.com/3Ncm6BQwVk

Citizens who have recently enrolled in past years said the time the website will be down coupled with the shorter open enrollment period will impair their ability to find the right health insurance plan.

Beginning of enrollment and in the past three years have taken almost the full time because getting re-rejected from Medicaid, figure out if

It's difficult in the marketplace. There are a bunch of plans in some places & folks need to understand how to pick an optimal plan that

Others, however, argue the times allotted for maintenance are when the site sees the least amount of traffic and it’s not harmful for those planning to enroll through Healthcare.gov.

Healthcare.gov is not the only way individuals can enroll in health insurance plans. Shoppers can also check their state’s Department of Insurance to see a complete list of Affordable Care Act-approved insurance plans.