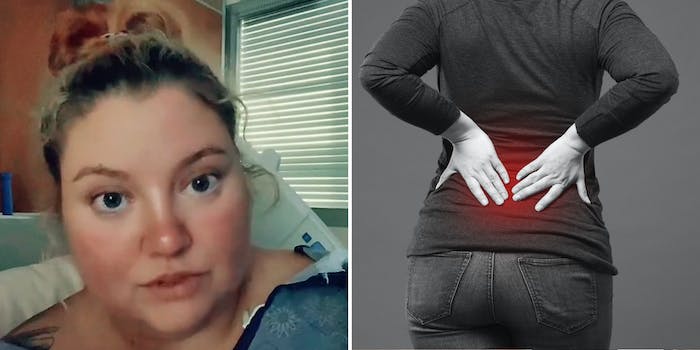 ‘I was at risk of going into sepsis’: Woman says doctor dismissed her pain, claiming she had a UTI—but she had kidney stones

'There's many issues with the healthcare system in this country, but especially when it comes to dismissing women's pain.'

After a bad experience with an emergency room doctor worsened her kidney infection, a TikToker is using the platform to share her experience and encourage viewers to advocate for themselves.

“There’s many issues with the healthcare system in this country, but especially when it comes to dismissing women’s pain,” user @stayathome_v says in her video. “Over the weekend I had really bad back pain, especially on my right side. At first I thought it could be a pulled muscle, but it felt like deep. I sucked it up all weekend long, you know, had to take care of my kids, be a mother, all that good stuff, until Sunday night when I was having chills and then sweats all night long, uncontrollably. I was like, ‘something’s up.'”

The following morning, she says she went to an urgent care clinic, where the creator was told she had some sort of infection and that there was something going on with her kidneys, but that the clinic was not equipped to treat her.

“He also made me feel like I was exaggerating my symptoms or being dramatic,” she continues. “He was just questioning everything that I was feeling.”

When she is finally taken to an assessment room, she said a CAT scan, blood work and urine test showed that she did indeed have an infection and kidney stones. At that point, she said she was ready to be admitted because urgent care told her that she would likely need to be hospitalized to ensure the infection was under control. However, when her E.R. doctor returned, he said the results looked like she had a urinary tract infection, a UTI.

When she was sent home, @stayathome_v began sweating, shaking and had a fever of 103 degrees Fahrenheit. She was rushed to another ER, where she learned she had a “very progressed infection.”

“I have to be hospitalized immediately,” she says. “I have multiple kidney stones in both of my kidneys, one in my bladder currently. I was at risk of going into sepsis.”

After returning home from her hospital stay that lasted at least four days, she filed a grievance with the first ER against the doctor who told her she had a U.T.I., and was told that an investigation would be conducted.

Some commenters shared similar experiences of their pain being minimized or ignored altogether by healthcare professionals.

“A male doctor denied me epinephrine and ordered a psych evaluation until he got a phone call from the medical director who was the one that sent me,” one commenter wrote.

“I had a male doctor tell me I was constipated,” another commenter wrote. “I had miscarried but my body hadn’t started the process. Waited two weeks and went to another hospital.”

“This!! I was in tons of pain and they told me twice at our ER that I was fine,” a commenter wrote. “I went to the next town over had 21 gallstones and had surgery immediately.”

The Daily Dot has reached out to @stayathome_v via Instagram direct message regarding the videos.