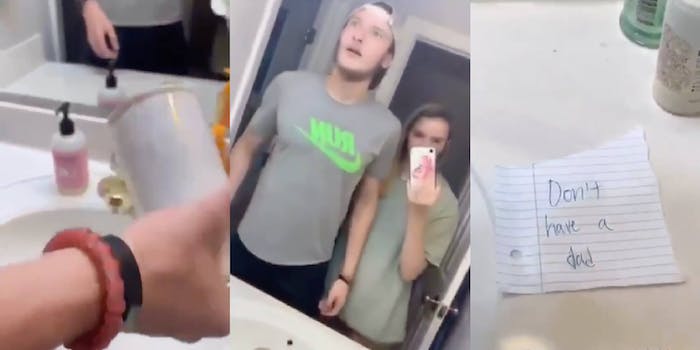 'They will not be graduates.'

A Georgia high school expelled two white students after they posted a video to TikTok saying negative and racist stereotypes against Black people.

On Thursday, the TikTok went viral after another student from Carrollton High School in Georgia posted it to Twitter.

In the video, the two teenagers make racist slurs and derogatory remarks about Black people such as, “go to jail,” “don’t have a dad,” and “eats watermelon and fried chicken.”

In a series of tweets, user @camden52801 says the girl in the video is a senior at the high school. She names both people in the clip.

“First we add Black,” the pair says, as they pour a cup of water down the sink. Next, they add “don’t have a dad,” and “eats watermelon and fried chicken” before repeating the process with the water.

When the pair sees a cup labeled “makes good choices,” there’s nothing inside.

Then, they pour a cup for “robbing people,” with the man in the video adding specifically “white people.”

In a statement to the New York Times on Friday, Carrollton City Schools Superintendent Mark Albertus said the students’ “behavior was unacceptable and is not representative of the district’s respect for all people.

“The racist behavior observed in the video easily violates this standard. They are no longer students at Carrollton High School,” he said.

Several celebrities and Twitter users denounced the video—and the teens in it—as racist and advocated for their expulsion.

District spokeswoman Julianne Foster told AJC that the students “will not be graduates of Carrollton High School.”

Albertus told the Times he is “deeply disturbed by the overt racist tone” of the video.

“This incident does not reflect the culture of Carrollton City Schools,” he said. “We are very proud of our diversity and so is our entire community. We don’t need to lose sight of this important attribute because of the actions of a few.”