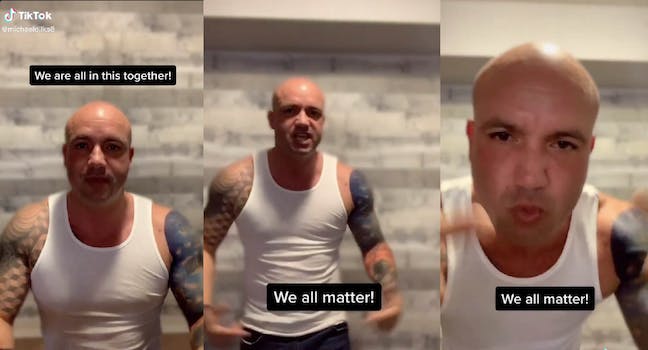 He says the videos are 'nothing crazy.'

Members of a Florida community are demanding action after a white sheriff’s deputy TikTok videos resurfaced. Critics say the videos are racist toward Black people.

The videos revealed the officer doing voice dubs to hip-hop songs, which included him lip-syncing the N-word along with other profanities and utilizing Black voice dubs in a stereotypical manner.

“I‘m successful on TikTok because I’ve got a real connection with the viewers,” Dilks told the Daily Mail. “My goal is to show cops are normal people who have some fun. It’s all tasteful. Nothing crazy. And 95% of the posts are done off-duty.”

Dilks and his wife Heidi are often fixtures on each other’s TikTok accounts. They currently have close to 100,000 followers combined. The Daily Mail reports that Dilks deleted “the allegedly offensive TikTok bits within minutes of his interview” with the publication.

However, screenshots the Daily Mail obtained showed some of Dilks’ past videos. One video showed Dilks “pretending to take his wife to jail” while the wife’s voice is dubbed with the voice of a Black man.

“This is straight out racist,” Anthony Brown, president of the Indian River County Branch of the NAACP, told the Daily Mail. ‘They even imitate a black man going to jail.”

On Facebook, some local community members expressed discomfort while others called into question if Dilks deserved to be called racist, the Daily Mail reports.

“How he depicts a race of people denotes how he disrespects them,” said in a Facebook post according to the Daily Mail.

“Hip hop is today’s top cultural favorite,” Whiteside said. “The n-word is used for so many examples of a person. It is not always used as a color thing. I do not support the word but I don’t get offended by words anyways…Don’t judge this guy off of other people’s bias opinions.

Cops posting content to TikTok isn’t out of the ordinary. The app is also a destination for health professionals including nurses and doctors.

Dilks denied accusations of racism and continues to post on his TikTok. One video shows him lip-syncing to the song “Whiteboy” by Tom MacDonald.

In the video, Dilks recites the following lyrics: “I would never judge a human for the cards he was give, or call them lesser than myself ’cause of the race that he’s mixed with.”