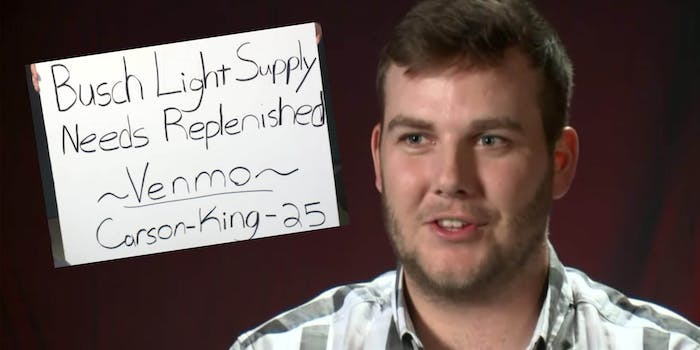 'I am embarrassed and stunned to reflect on what I thought was funny when I was 16-years-old.'

An Iowa State fan who raised $1 million after holding up a sign at a football game lost ties with Anheuser-Busch after his racist tweets from 2011 were discovered by local news.

Carson King, a 24-year-old who works security at a local casino, went viral last month after he held up a sign reading “Busch Light Supply Needs Replenished” and asking for $25 at the televised game. Money started pouring into King’s Venmo account.

As the funds increased to $11,000, King announced he would donate the money to the University of Iowa Stead Family Children’s Hospital. Busch Light and Venmo matched the donated amount, and by Wednesday, more than $1 million had been raised.

A profile in the Des Moines Register published Tuesday described King as “an example of kindness and compassion.” The article also exposed King’s social media where, in the past, he wrote racist content.

The “jokes” compared Black mothers to gorillas and was dismissive of Black victims in the Holocaust. The Register reported the now-deleted tweets were from 2012, when King was 16-years-old.

On Tuesday, fewer than 10 days after he went viral, Anheuser-Busch cut ties with King, according to KCCI Des Moines.

King held a press conference on Tuesday and apologized for the racist tweets.

“Eight years ago, when I was a sophomore in high school, I made some social media posts with my friends that quoted and referenced the show Tosh.0,” he said, according to KCCI. “One of those posts was brought to my attention by a member of the media today.

“I want everyone to understand that this was my decision to publicly address the posts and apologize,” he told KCCI. “I believe that is the right thing to do.”

Anheuser-Busch told KCCI that the company would honor its commitment to donate more than $350,000 to the University of Iowa Hospitals and Clinics but that King’s comments “do not align with our values as a brand or as a company.”

On Tuesday, King shared a statement on Facebook, saying that he had no recollection of a racist tweet but after re-reading it as an adult, he realized it was “offensive and hurtful.”

Please read:The Des Moines Register has been nothing but kind in all of their coverage, and I appreciate the reporter…

“I am embarrassed and stunned to reflect on what I thought was funny when I was 16-years-old,” King wrote. “I want to sincerely apologize.

“I am sharing this information tonight because I feel a responsibility to all of the people who have donated money,” he said, adding that while he cannot go back and change himself, he wants to apologize and “work to improve.”

The post garnered immense support and thousands of shares and comments. “Life is about learning from our mistakes. You are growing and learning each and every day,” one commenter wrote.

The Daily Dot has reached out to Venmo and University of Iowa Stead Family Children’s Hospital for comment.