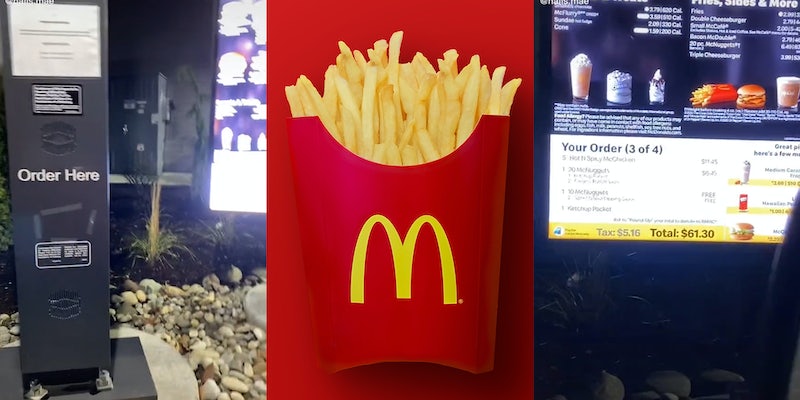 ‘You know we close in like 10 minutes, you f*cking b*tch?’: McDonald’s worker flames drive-thru customer for adding large fry to her order right before close

While many McDonald’s locations do stay open 24 hours, a TikToker was reminded in a not-so-subtle manner that she visited one of the stores that do not.

The 10-second clip posted by @hails.mae features her in the McDonald’s drive-thru, at the order screen. @hails.mae zooms in quickly on the total of her order: four items at a whopping $61.30. She zooms back out while asking the employee, “Oh, can you add a large fry onto that, please?”

That’s when the McDonald’s worker responds with annoyance. “You know we close in, like, 10 minutes, you fucking bitch? Come on,” they say.

The clip ends with a quick chuckle from @hails.mae.

As of Monday, the TikTok video was viewed 1.1 million times, and viewers are siding with the McDonald’s worker.

“I genuinely feel his pain,” a second empathized.

“Bro said what everyone thought,” a third wrote.

“As a maccas worker i agree,” a fourth concurred.

Many pointed to the closing time as to why the customer was in the wrong.

“ANYONE that goes anywhere before the last 15 mins of closing is in the wrong for me lol,” another said.

Due to the TikToker finding the worker’s reaction humorous, some figured they knew each other and that it was just banter.

“I really hope he was one of her friends joking around with her and if not he deserves to be fired. Sometimes this happens & the customer comes first,” one said.

A few similarly criticized the worker. “Should never speak that way to a person. Kindness always,” another said.

“Bruh i had to take an order at starbucks with 30 seconds left and you have to be nice still,” another said.

The “worker vs. customer who shows up right before closing time” has been a feud seen on TikTok recently. In July, a Chick-fil-A worker was filmed not allowing customers inside to pick up their order because they showed up at closing time. The worker threw their food away in front of them, seemingly intentionally. That same month, a TikToker alleged employees played “male screaming sound effects” to drive her out of the restaurant. Viewers assumed she had arrived right before they were about to close. In both instances, many viewers sided with the workers.

Editor’s note: The video is from 2021 and was covered by the Daily Dot in December. It was staged. It went viral again this week and was re-reported without said context.