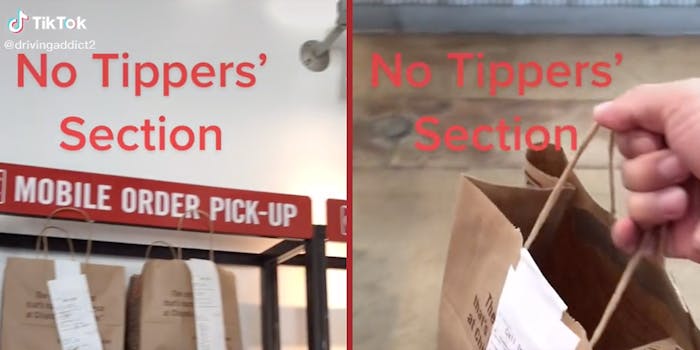 'Guess your food staying on that shelf then.'

A TikToker says DoorDash orders that don’t include tips are left waiting for a driver for so long that they end up with their own section at the restaurant. The claim is sparking debate in the comments.

TikToker @drivingaddict2 has two pages dedicated to showing his life as a DoorDash driver, with many of the videos shaming requests he gets for deliveries with minimal or zero tip.

One in particular gained traction after he wrote that a shelving unit at Chipotle partially filled with orders was the “no tippers’ section.”

The driver referred to the bags as “Tipped DoorDash order vs nontipped order” in the caption and filmed himself picking up one from the bottom shelf that was presumably an order from a customer who actually tipped.

Another video on @drivingaddict2’s page appears to show a handful of orders relegated to a separate darkened shelving unit while others are kept on a counter ready to be grabbed, again with the suggestion that the former are the ones that have been there awhile and include no tip.

The concept of tipping before delivery has become contentious with the rise of apps like DoorDash and Postmates. Some customers say they prefer to tip based on whether the driver follows instructions or actually delivers the food at all, while drivers aren’t keen on accepting a delivery request when they don’t know how much they’ll be making on it.

“Drivers only get $2 per delivery,” @drivingaddict2 commented, referencing the base pay in his area, which can sometimes go up based on additional factors such as a delivery being passed over by drivers for too long.

Still, viewers expressed their division in the comments.

“I tip after service is given,” wrote @kasper_skolf. “If this is how you treat your customers cuz you expect a tip, you don’t deserve a tip.”

“If you are using door dash and don’t tip you might as well expect not to get your food,” another TikToker argued.

“People that say they tip after or don’t tip…well guess your food staying on that shelf then,” @mraboveworld pointed out.

The Daily Dot has reached out to @drivingaddict2 via TikTok comment.

Update 12:56pm CT, Sept. 23: In an emailed statement to the Daily Dot, a DoorDash spokesperson said Dashers make an average of more than $25 per hour when they make deliveries.

“We are actively looking into the issues raised in this video and will take appropriate action as we learn more,” the statement said.