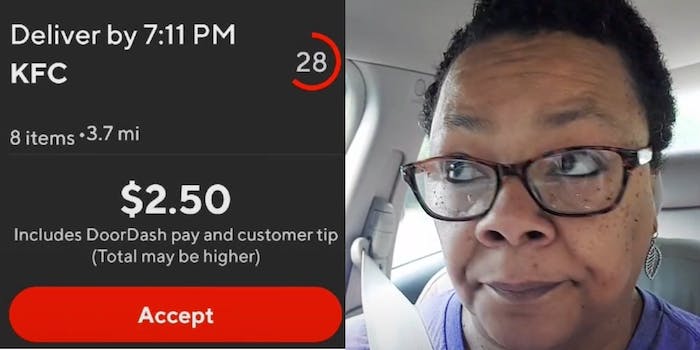 DoorDash's base pay currently ranges between $2-$10.

Posts in recent days on social media platforms including TikTok, Reddit, and Twitter are aiming to raise awareness over a proposed July 31 DoorDash boycott.

The call for the boycott, primarily concerned over the base pay for Dashers—the name DoorDash gives the independent contractors who deliver food for the tech company connecting restaurants to customers—includes a suggestion that people who would typically use DoorDash order food from competitors like UberEats and GrubHub this coming Saturday.

A TikTok video from Denise Small, who posts from the @voicelikemine account, articulated why she’s calling for a boycott.

Her video starts out, “Good morning, all. This is Denise, your usually friendly DoorDash driver, but I’m not happy today.”

The Daily Dot could not find records of the base pay change, but Small is not the first Dasher to reference an alleged adjustment this year. According to DoorDash’s Independent Contractor Agreement, available on its website, Dashers receive a base pay amount for each delivery, plus tips that customers can choose to give or not give the delivery driver (or bicyclist). A link from that contract, going to a separate web page titled, “How Dasher Pay Works,” notes that the base pay can range anywhere from $2 to $10 for each delivery, “depending on the estimated time, distance, and desirability of the order.”

The pay explainer goes on to say, “Deliveries that require Dashers to travel a longer distance, that are expected to take more time, and that are less popular with Dashers will have a higher base pay. Base pay will not change based on the customer tip amount.”

Small, calling for the boycott in a TikTok video that received more than 172,000 page views in its first three days up, expressed her frustration at being a Dasher.

She noted that she’d made less than $20 that day, though she didn’t specify how long she’d been delivering. She did reveal, however, “I’ve declined so many orders because they’ve been $2. Who the fuck is going out for $2?”

She went on to observe, “They don’t keep up the maintenance on our cars, they don’t do anything. And then to lower the base pay? Do not give them your money.”

She added, “If this gets me deactivated, oh well.”

She then shared a video showing her phone screen and a series of low base pay requests that she declined.

The subreddit devoted to DoorDash, r/doordash, features a post from July 20 listing reasons for the boycott, though it looks more the work of a single poster than anything that was vetted as part of a concerted effort. For one, it said, “We know some of us rely on this income or trying to meet ends meat” as part of a statement articulating strategy, most certainly meaning “make ends meet.”

It included mention of the base pay, calling for a minimum base pay of $4.50 per order, and also called for “TIPS AND FULL PAYOUT Transparency before accepting orders,” with the author adding, “As we are not DoorDash employees they can’t force us To take their loses for them if THEIR customer can’t cover fully the cost of Delivery.”

Though some went to the post to show support, drivers weren’t all unified behind it. “Let’s try that when it’s not a Saturday,” one commenter requested. “I’m not down with the loss of 200.00 when the end result won’t change. How about a Thursday?”

A tweet dating back to July 17, tagging DoorDash, noted, “I been seeing talk of a system-wide driver boycott on 7/31 on Reddit. What are you doing about this?”

Dashers appear to have been raising awareness about base pay issues for quite some time. Last year, one Dasher started a petition to raise the base pay to $5 during and after the COVID-19 pandemic. The Daily Dot previously reported on a Dasher who shared that drivers are disincentivized to take low-tip deliveries because the base payouts aren’t worth the effort.

A DoorDash spokesperson told the Daily Dot that Dashers earn over $25 on average per hour they’re on a delivery when tips are included.