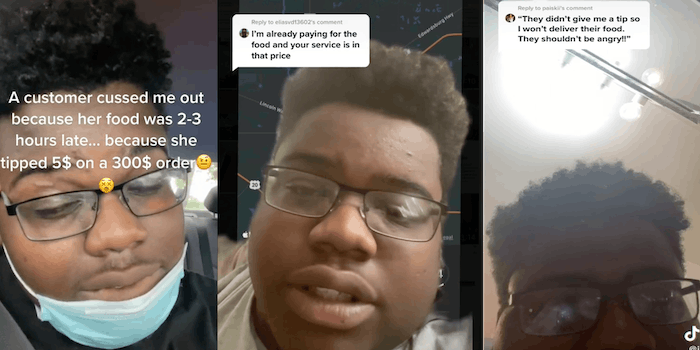 DoorDasher explains how tipping can impact delivery time in viral TikTok, viewers had no idea

'If we don’t want to take your order, we’re not taking your order.'

If your DoorDash orders haven’t been delivered fast enough, maybe it’s because you haven’t tipped enough.

DoorDasher and TikToker Jay explained why this might be the case in a viral TikTok series.

In a controversy-sparking TikTok, Jay, or @jaylenheree on the platform, said a customer cussed him out because her food was delivered two to three hours late—after she tipped $5 on the $300 order. The video received almost 620,000 views on TikTok and a whole slew of comments.

In preparation for inevitable comments, Jay wrote under his own video, “Before you comment something dumb, I received the order 2-3 hours late, I didn’t care about her tip, it’s DD’s and her fault for the order being late.”

Many viewers agreed with Jay that customers should tip when ordering delivery—or maybe just learn to cook.

“TIP MORE PEOPLE or cook or pick it up,” another person shouted.

Jay added in the comments that the customer lived 10 miles away from the Texas Roadhouse she ordered from.

Not everyone agreed, though. As one person pointed out, “I’m already paying for the food and your service is in that price.”

“For the people who say they don’t tip,” Jay said in a video reply to the comment, explaining that DoorDashers can lose money taking low-tipped orders. According to Jay, service and delivery fees only pay for a customer’s order notification to be sent to DoorDashers’ phones because DoorDash drivers can choose which orders they want to deliver. DoorDash did not immediately respond to the Daily Dot’s request for comment.

“If we don’t want to take your order, we’re not taking your order,” he said.

So when customers decide not to tip, Jay said their decision doesn’t usually affect him for two reasons: 1) he doesn’t live in the customer’s city; and/or 2) he wouldn’t take an order without a tip to begin with.

Eventually though, non-tipping customers will get their food, but Dashers will often wait until it’s a high enough payout to take the order. DoorDash continuously raises the base payout for an order when Dashers decline to deliver it. However, by the time those customers get their food, it could be cold and soggy.

In another TikTok, Jay clarified that by the time he took the woman’s Texas Roadhouse order, it was already two or three hours behind because the offer was so unappealing to other Dashers. The more Dashers who refused to deliver the order, the higher the offer amount became, so by the time Jay accepted it, it was a $25 offer.

By the time he delivered the order, he’d only had it for less than 30 minutes. It wasn’t his fault for taking too long to deliver the food. Unfortunately, the pay wasn’t worth other Dashers going out to deliver.

“If a customer doesn’t want to tip, that’s totally fine. That’s up to them,” Jay explained. “And it’s up to me to take their order or not because you know, we have that choice.”

Viewers were thankful for the explanation, as many customers don’t understand how DoorDash works.

“DoorDash needs to explain this to customers because they put the blame on the doordashers and it’s not fair to you guys!” one person commented.

“Thank you for explaining this because I got so heated thinking you waited just to piss her off,” another said. Jay replied that he would never do that.

“If I didn’t want to do the order I wouldn’t accept it to begin with,” he said.

After all, it’s no skin off his nose not to accept someone’s order without a tip. Except for maybe getting cussed out at the end.