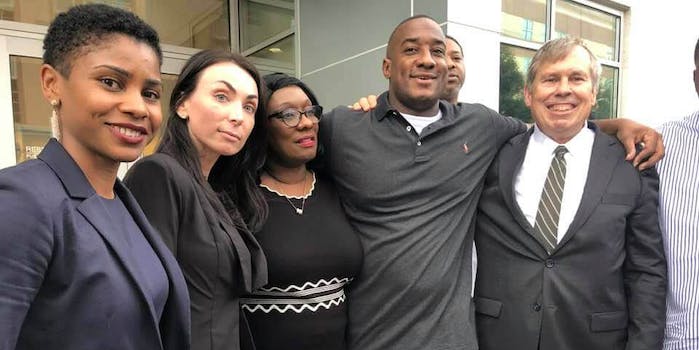 'I really believe that my story will be able to help someone else's.'

Thanks to a “new DNA screening process,” Lydell Grant, who was sentenced to life in prison for the 2010 Houston murder of Aaron Scheerhoorn, could soon be exonerated, according to the Root.

Grant was released on bail in November, NBC News reports, due to the help of a computer software program “developed to reduce the subjectivity in interpretation” of DNA.

“I really believe that my story will be able to help someone else’s,” Grant told NBC News.

The first DNA-based exoneration occurred in 1989, and since then, DNA testing has proved to be a vital tool in seeking justice for those wrongfully convicted.

TrueAllele, created by the company Cybergenetics, was used to determine Grant’s DNA did not match fingernail scrapings that contained the victim’s DNA profile mixed with another.

With help from the Innocence Project of Texas, Cybergenetics gained access to the FBI’s Combined DNA Index System. From there, it was discovered that the unidentified DNA profile belonged to an Atlanta man, not Grant. (In the past, Cybergenetics has been criticized for the secrecy surrounding the TrueAllele code used to analyze DNA.)

This DNA screening process is a stark contrast to the process used almost 10 years ago that led to Grant’s conviction. According to NBC, the original DNA report analyzed by the Houston crime lab was based on a “traditional method in which a forensic scientist studies the genetic makeup of the DNA sample,” meaning analysis was left to human interpretation. This method is known to have produced inaccurate results in the past.

According to Science magazine, “analysis becomes highly subjective” when there’s “a mix of DNA from various potential suspects” found on a single item.

“There’s probably 5,000 or 6,000 innocent people in Texas prisons alone,” Mike Ware, attorney and executive director of the Innocence Project of Texas, told NBC News. “How many of them could benefit from such a reanalysis of DNA that was used to convict them? I don’t really know, but this is a historic case that could open the door for those who thought it was shut forever.”

In the U.S., there have been about 367 DNA exoneration cases to date, the Innocence Project reports, with 61% of those cases involving Black individuals.

In December, a judge requested the Texas Court of Criminal Appeals vacate Grant’s conviction, according to the Root.

Houston Police Chief Art Acevedo apologized in a statement to Grant and his family in January after Jermarico Carter admitted to killing Scheerhoorn, according to local station ABC13.

“We firmly believe the charges being filed on this second suspect, now linked by DNA and additional testing, will help bring closure to the families of Mr. Grant and Mr. Scheerhoorn,” Acevedo said.