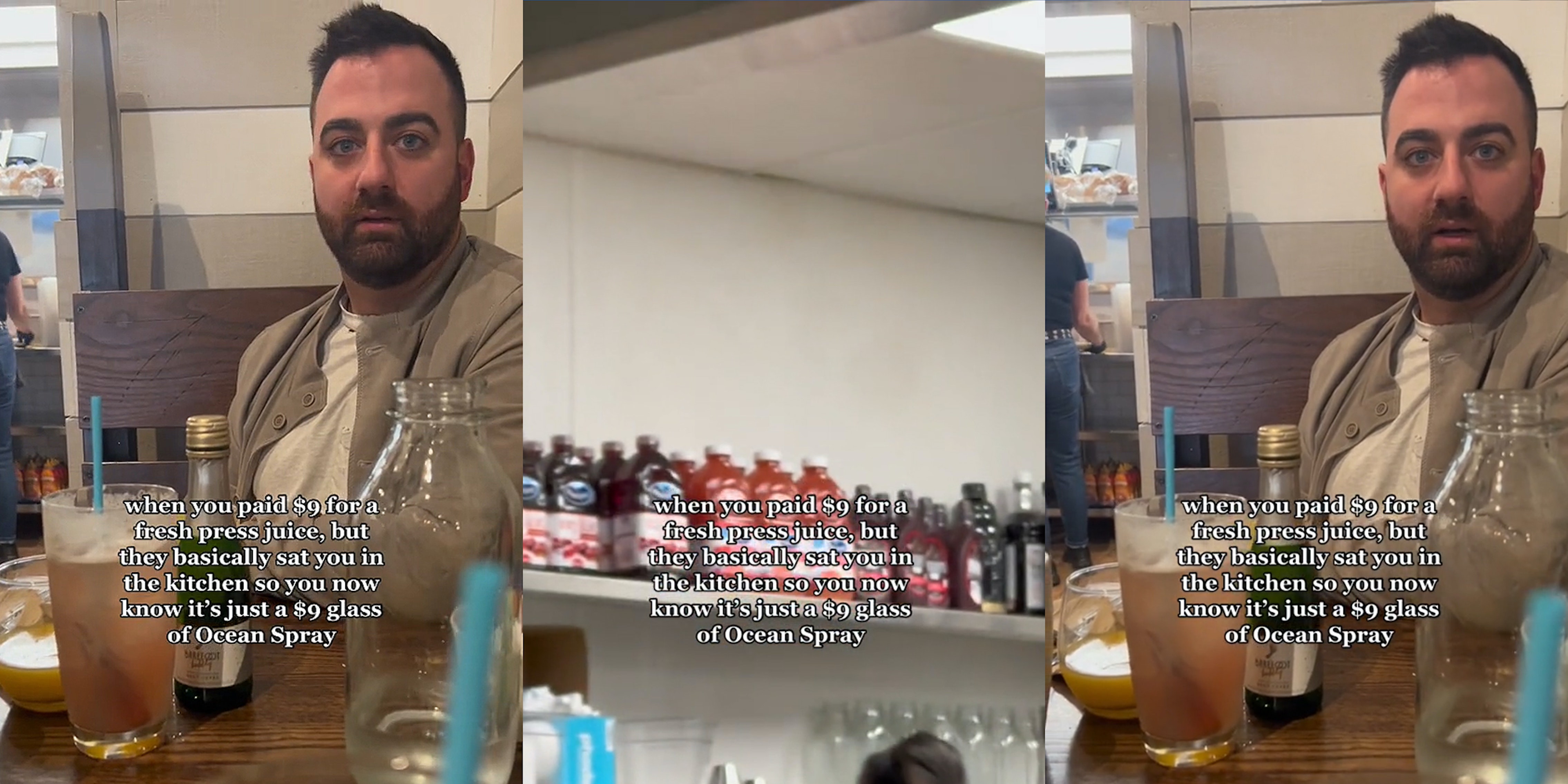 ‘When you paid $9 for a fresh press juice’: Customers allegedly catch workers using Ocean Spray after being seated by kitchen

'The worst is seeing bagged pancake mix at a brunch spot.'

In a viral TikTok, customers claimed to catch workers using Ocean Spray to seemingly make “fresh juice” while charging a boatload of money.

The video was uploaded by user Jhonny Curran (@jhonnycurran). In it, Curran records her husband, who appears a bit shocked, before zooming in on the top shelf of a restaurant kitchen where large bottles of Ocean Spray rest. The text overlay reads, “When you paid $9 for a fresh press juice, but they basically sat you in the kitchen so you now know it’s just a $9 glass of Ocean Spray.”

The video, which amassed over 1.1 million views since it was posted on Nov. 12, was deleted shortly before publication. However, it was up long enough for current and former employees of the restaurant to comment in defense of the establishment.

“Hi, I work at First Watch! The specialty juices are juiced every morning in a juicer. We do have cranberry, apple, & grapefruit as well though!” one viewer claimed.

“The speciality juice is actually fresh, I worked there and we juice it every morning,” a second wrote.

“Trust me the juices are fresh squeezed but if you order just a regular cranberry, apple or grapefruit they don’t claim to be,” a third echoed.

“The specialty juices are fresh. cranberry, grapefruit and apple are not though,” a fourth agreed.

In an email interview with the Daily Dot, Curran shed light on the situation. She revealed that she deleted the video because it was meant to be lighthearted rather than cause any trouble for the business.

“The video wasn’t intended to cause an uproar,” she wrote. “I never revealed the restaurant, it was just an honest reaction from my husband when he saw the Ocean Spray.”

Curran also revealed she and her husband found it a bit funny that they “got sat basically inside the kitchen” and that the video was meant as “a joke.” She also acknowledged she may have been mistaken about how the Ocean Spray was used.

“Also, based on the comments and staff that potentially works there, the juices are fresh pressed so it must not be every juice drink,” she wrote. “I am here on TikTok to have fun, not hurt businesses. I’m sorry.”

Though Curran’s situation seems to have only been a misunderstanding, many commenters felt her initial frustration and shared their own experiences with being overcharged for food only to be met with disappointment.

“The worst is seeing bagged pancake mix at a brunch spot and they’re selling pancakes for 15 dollars,” one person shared.

“Once at the fair I paid $12 for a frozen lemonade and they took minutemade, water, and ice and blended it in front of me,” a second revealed.

“I paid $17 for a bottle of fresh pressed in a hotel in San Diego last week & I still swear on my soul it was cranberry juice,” a third commented.

“Please at my older job they were serving lemonade that only had powder and water $10 for regular, $20 for 2 shots in it,” a fourth wrote.

This isn’t the first time a video of restaurants using store-bought products to make food and beverages has circulated TikTok.

A video went viral of a Starbucks allegedly using Simply Lemonade to make their lemonade. Supposedly, Starbucks resorts to Simply Lemonade if they’re out of the ingredients to make the drink. Another video posted by an Applebee’s worker alleged the chain makes its pasta by using regular penne from the store.