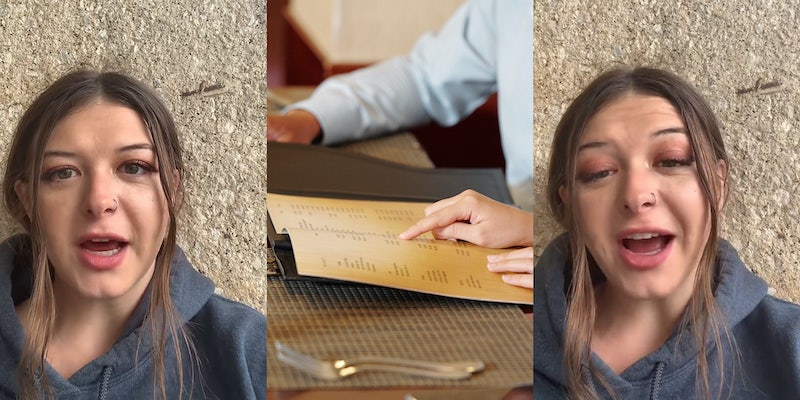 ‘I misinterpreted that question’: Server says customer blew up at her after she shared her recommendation for ‘best appetizer’

'The fact that he thought it’d be ok to speak to you that way.'

Many workers in the workforce have been taking to TikTok to share their encounters with rude customers, predominantly restaurant and fast-food employees. In a viral TikTok video, a server recounts her experience with a customer when they asked for the “best” appetizer.

The short clip features user Katie Biggar (@katiebiggar0) as she shares her story with her 181,000 followers. She starts off by saying how when she was at work, one of the customers asked her what the ‘best appetizer’ was.

“My personal favorite is the candied bacon,” Biggar says she told him. She claims the the customer then responded with “Pardon my French, but I don’t give a fuck what your favorite is.”

“You’re actually right,” Biggar says in the clip. “I misinterpreted that question.”

The video racked up over 808,000 views as of Friday, with many viewers criticizing the customer’s behavior.

“The fact that he thought it’d be ok to speak to you that way,” one viewer criticized.

“I still can’t grasp how ppl can be so rude to waiters, like when they tell me their personal recommendations, I’m all for it,” a second said.

“I’m so sorry. I don’t even know how servers do it anymore,” another user wrote.

Some stated how the situation was a double-edged sword.

“How did they want you to answer? The best is actually a matter of opinion when it comes to the palette…similar to art and music, so pardon my French He can fnck right off for treating you that way!” one user wrote.

“Lmao but if you tell them the most popular they press you for YOUR favorite, can’t win,” a second stated.

“How can you answer that question without giving your opinion on what’s the best,” a third asked.

Others shared what they would’ve done in Biggar’s shoes.

“I would’ve lost my job and gone to jail immediately,” a second shared.

“I’d laugh then ask if there was another way to interpret his question and wait for an explanation,” another commented.

“I would have responded, “well I don’t give a F about your order “ and walked off,” a user said.

Biggar commented about the situation, writing, “I really love my job this is just wild and funny to me.”