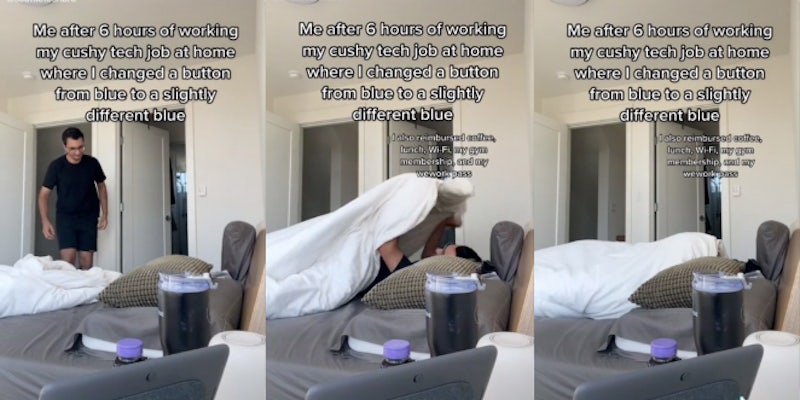 ‘Tech is so hard omg’: Work-from-home employee with ‘cushy tech job’ says all he did for day was change color of a button, sparking debate

'I also reimbursed coffee, lunch, Wi-Fi, my gym membership, and my wework pass.'

In a viral TikTok, a work-from-home software engineer said all he did in a workday was change a button from one shade of blue to another, leading many viewers in the comments section to debate whether or not tech jobs are “cushy.”

The viral video, which has over 231,800 views, was posted in August by software engineer and TikToker Aaroh Mankad (@seattletechbro). Mankad has over 41,900 followers and often makes videos about his experience working in tech. The video shows Mankad crawling into bed and pulling the covers over his head. A trending audio clip, pulled from the Real Housewives reality television series, plays in the background of the video.

“Me after 6 hours of working my cushy tech job where I changed a button from blue to a slightly different blue. I also reimbursed coffee, lunch, Wi-Fi, my gym membership, and my wework pass,” the TikToker captioned the video. “Tech is so hard omg [crying emoji].”

The video sparked debate in its comments section. Many viewers said they were jealous of the TikToker’s job.

“Im in the wrong career smh,” one argued.

“Sir, I need to know HOW to get into this,” another urged.

Other viewers agreed with the TikToker that some tech jobs can be “cushy.”

“Truth in this [laughing crying emoji],” another replied.

While many alleged workers in the comments section agreed tech jobs are laid back, others said their tech jobs aren’t as easy as the TikToker says in his video. One user asked: “Is frontend dev really that easy?” They are referring to software development for the front-facing user interface of websites as opposed to backend software development, which focuses on software changes users can’t see.

“No, but sometimes you get a glorious glorious day that is,” one user responded.

In another comment, one user argued these small changes in appearance can have a big impact, saying, “Yes but that change might have sold millions more in hair transplants or whatever’s being advertised these days.”

The TikToker who created the video left a comment saying “brownie points if you get the gmail reference” and describing the referenced story as “so painful.” It appears the TikToker is referring to an experiment titled “50 shades of blue” conducted by Google web developers in the early 2000s, which tested various shades of blue on buttons in Gmail and Google search to see which shade produced the most link clicks for advertisements.

Switching the shade of blue used on advertising links ended up adding an extra $200 million per year in revenue for the company. However, the project drew criticisms from some tech workers who saw the project as a waste of time and painstaking over “miniscule” changes, according to the Guardian.

Despite commenters on the viral TikTok sharing their alleged experiences with laidback tech jobs, some tech workers have argued the opposite. As previously reported by the Daily Dot, one tech worker in August said the industry isn’t as “cushy” as it’s made out to be due to its highly demanding interview processes and often stressful workplace culture. In response, some TikTokers agreed, while others argued that high wages in the tech sector make up for the sometimes rigorous demands.

In the tech sector, high salaries and coveted benefits are common due to high demand for skilled tech professionals. Many tech companies are known for offering unique perks, like free meals, gym use, and more. For non-remote jobs, these perks are sometimes criticized for being on-site and encouraging employees to remain on job location beyond traditional working hours.

Work culture at technology companies is also widely criticized for its lack of diversity and inclusion—as Black, Latino and Indigenous workers remain underrepresented in the industry. BIPOC tech employees also report feeling “unwelcome” and “uncomfortable” at higher rates than white tech employees, according to Forbes.

In addition, despite skilled tech workers being in high demand, economic troubles have led to increased job insecurity due to recent major layoffs and hiring freezes at major tech companies—including Robinhood, Shopify, Microsoft, Oracle, and Netflix.

The Daily Dot reached out to TikToker Aaroh Mankad via email and TikTok comment.