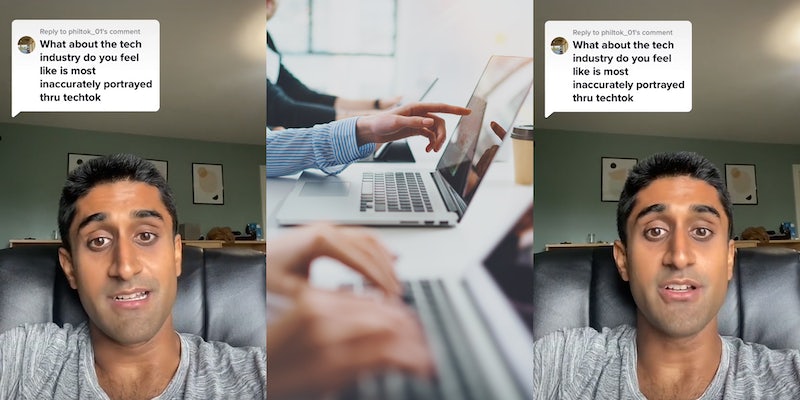 'Super stressful industry. Don't even get me started on the interview processes.'

A tech worker on TikTok has sparked debate after claiming that the tech industry isn’t as cushy as its portrayed on social media.

In response to a question about tech jobs, TikTok user Varun Rana, who currently boasts more than 43,700 followers, argued that the biggest misconception surrounds workplace culture.

“I could write a novel about this,” Rana says. “By far the most exaggerated thing about tech that you see on TikTok is just how comfortable and chill people make it look.”

Rana goes on in the video, which has racked up nearly 278,000 views, to state that much of what is seen on the platform regarding the industry is from new employees with little to no experience.

Describing portrayals of tech jobs on TikTok as akin to an “adult daycare,” Rana argues that the industry is much more grueling than many let on.

“I’ve got to say a majority of it has been pretty wild. This industry is incredibly ambiguous,” Rana says of his own experience. “You have to continuously upscale yourself. There is no precedent for anything, which makes getting work done kinda hard. It makes getting career advice kind of hard and it leaves you in this never-ending existential crisis.”

Despite the issues, Rana says that he still enjoys tech work but merely disagrees with many descriptions of it on TikTok.

Other tech workers appeared to agree, noting in the comments that they too have had similar experiences in the industry.

“Super stressful industry,” one commenter wrote. “Don’t even get me started on the interview processes.”

One user said that many videos about tech jobs on TikTok are nothing more than recruiting propaganda.

“It’s all viral recruiting,” the user said. “Tech is struggling for talent like they haven’t before… they have to make it look appealing… they do that with social media.”

But not all users agreed. Some TikTokers argued that while the job can be grueling, the salary makes up for it.

“I’m in tech,” the user wrote. “It’s not adult daycare but the work to salary ratio is a dream compared to any other industry.”

Another user said that obtaining a cushy job in the tech realm was possible so long as a high salary wasn’t needed.

“I’m just gonna say… if you aren’t pursuing a crazy high salary, you really can get that super chill & comfortable lifestyle,” they commented.

The Daily Dot reached out to Rana about his viral video but did not receive a response by press time.

Although the tech industry remains a large-scale employer, economic woes have recently led to major lay-offs at companies such as Robinhood, Shopify, Microsoft, Oracle, and Netflix.