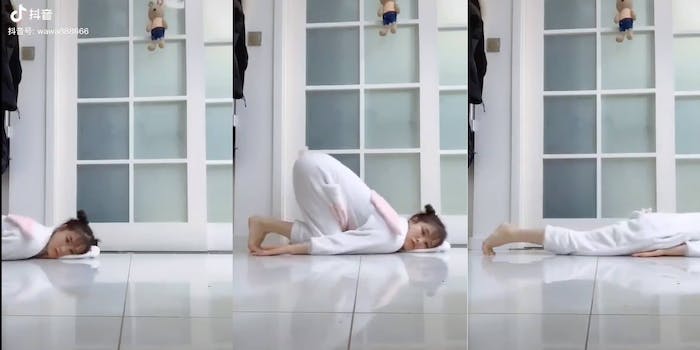 Videos show how people are entertaining themselves during coronavirus lockdown

Residents of the world’s most populous country are spending a lot of time indoors. But lockdowns across China due to the spreading coronavirus are prompting residents to come up with creative ways to pass the time.

Manya Koetse, the editor-in-chief of the website What’s on Weibo, shared a tweet thread of videos from the Chinese social platform showing ways residents kept themselves preoccupied. From playing badminton indoors to playing mock catch-and-release with fish, residents have found ways to combat their boredom.

How to survive staying indoors during #coronavirus lockdown according to these very important videos making their rounds on Chinese social media. Firstly: don't be afraid to express your feelings and get in touch with your emotions. pic.twitter.com/xd8yj73dtx

Travel restrictions have affected about 56 million people within in the Chinese province of Hubei, according to Al Jazeera. Wuhan, the capital of the Hubei province where the new coronavirus was first detected, has been under lockdown since Jan. 23.

“When Wuhan residents step outside, it’s mostly to go to the supermarkets, food stores and pharmacies that stay open as part of a government effort to sustain the city,” the New York Times reported.

People in other cities have quarantined themselves following advice from the government.

One resident had so much time on their hands, they made a figurine of Mickey Mouse out of assorted shells from pistachios, sunflower seeds, and other foods. In order to keep their kids entertained, one couple created DIY carnival games in their living room, according to the South China Morning Post. And a TikTok video shared to Twitter shows someone wearing a onesie and scrunching themselves across the floor.

China's national coronavirus crisis, forcing so many people indoors for days on end, is already inspiring a rich outpouring of art. https://t.co/v5n0gojHHJ pic.twitter.com/oFmfh46U6M

Researchers have yet to find a vaccine for the coronavirus. Recent videos have surfaced online of Wuhan residents shouting encouraging words and messages of solidarity “to boost moral” as they whether the lockdown. Residents often shout “Wuhan jiayou,” according to the BBC, which is said to mean “Stay strong Wuhan” or “Keep on going Wuhan.”

“We will get through this,” one commenter on Weibo said, according to the BBC.  “Wuhan jiayou, the whole country is supporting you.”