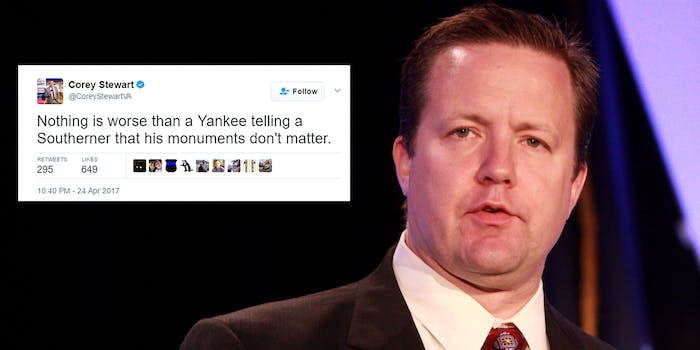 This week, New Orleans removed the first of four memorials around the city that are dedicated to the Confederacy and the antebellum South, with the mayor calling them a “blatant affront to the values that make America and New Orleans strong today.”

The first statue removed, as ordered by Mayor Mitch Landrieu, was the “Liberty Place” memorial, which honored white supremacists who killed Metropolitan police officers during a siege of the city to protest Reconstruction.

The move was approved by the city council and upheld by the courts, but despite that, workers removed the statue yesterday under the cover of darkness, wearing masks, as they were on the receiving end of death threats.

One person who publicly decried the actions of New Orleans and its mayor is Virginia Republican candidate for governor Corey Stewart.

Here was his nuanced take.

Nothing is worse than a Yankee telling a Southerner that his monuments don't matter.

That’s interesting on two levels. First off, even accounting for hyperbolic internet speak, there are lots of things worse than a Yankee telling a Southerner that his monuments don’t matter.

But even better, Stewart himself is originally from Minnesota, whereas Landrieu comes from a long-established Louisiana lineage.

People from California telling me about why they hate Virginia Heritage is great irony. CA wants to be a sanctuary state. #EpicFail

Thank God all these people from California & New York who voted for Hillary didn't win. We would be tearing down the Washington monument.

One of the other monuments New Orleans plans to remove honors Confederate Gen. Robert E. Lee, which Stewart is adamantly against. The city of Charlottesville, Virginia, is also planning to remove or relocate a statue of Lee.

No Robert E. Lee monument should come down. That man is a hero & an honorable man. It is shameful what they are doing with these monuments.

After they tear down Lee & Beauregard, they are coming for Washington & Jefferson. #HistoricalVandalism

Stewart currently serves as chairman of the Prince William Board of County Supervisors, and in response to his stance and the news that he attended a Confederate-themed ball this month, four members of the board have announced their intent to support his rival in the Republican primary. He also lost the support of Prince William County Sheriff Glendell Hill.

Stewart, who is polling well behind rival Ed Gillespie, has made freedom of speech—and the symbols of the Confederacy—a tenet of his campaign.

“The Confederate flag is not the issue,” Stewart said in a statement. “The radical left’s obsession with tearing down historical monuments is about silencing all dissent.”