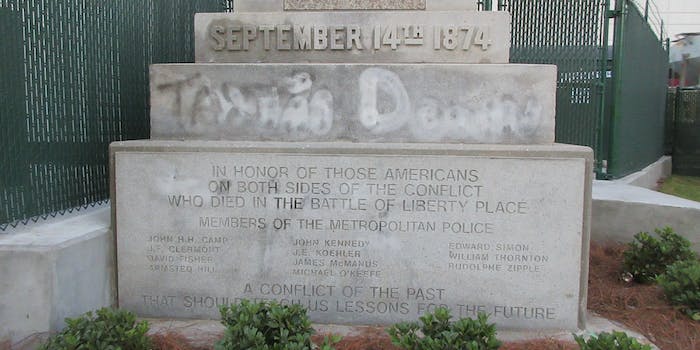 4 statues honoring white supremacy are scheduled to come down.

The Confederacy won’t be honored by the New Orleans government any longer. Four city monuments erected in support of the Confederacy’s legacy—which includes protecting slavery and bolstering white supremacy—have been ordered to be taken down.

The first monument to go was the “Liberty Place” statue, honoring the Battle of Liberty Place conflict in which white New Orleans citizens rebelled against a biracial government created during the Reconstruction Era. New Orleans Mayor Mitch Landrieu condemned the statue, urging that the monument no longer reflects the views and values of the New Orleans people.

“The statue was put up to honor the killing of police officers by white supremacists,” Landrieu explained during a Monday morning news conference. “Of the four that we will move, this statue is perhaps the most blatant affront to the values that make America and New Orleans strong today.”

The New Orleans government removed the statue at 5:35am in hopes of avoiding disruptions from white supremacists and Confederacy apologists who want the statue to remain. ABC News reports that city officials and contractors have faced death threats for removing the statues, with workers wearing military helmets, bulletproof vests, and scarves for protection. Police supervised the removal, assuring that no workers or nearby citizens were hurt in the process.

“All of what we will do in the next days will be designed to make sure that we protect everybody, that the workers are safe, the folks around the monuments are safe and that nobody gets hurt,” Landrieu explained.