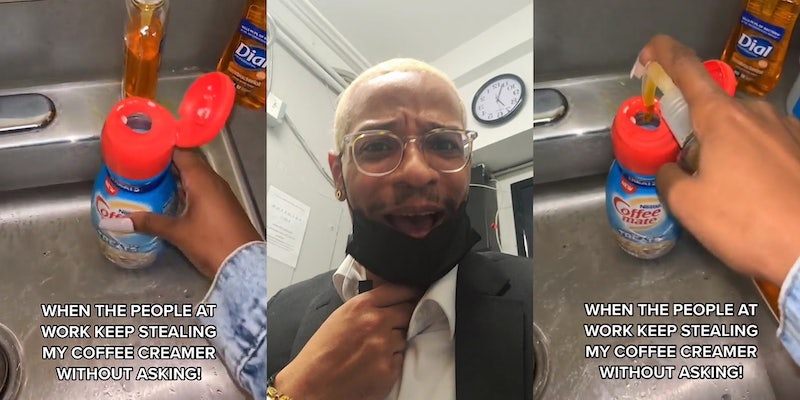 ‘Let me help you out’: Worker shares PSA after employee puts soap in coffee creamer so co-workers stop stealing it

'Someone kept eating my lunches, so I put a ghost pepper in my soup, and it turns out it was HR lady.'

Recently, a TikToker went viral after sharing the various ways they attempted to stop their co-workers from stealing their coffee creamer. The first video involves adding soap to the creamer; the latter iterations included mustard and apple cider vinegar.

Now, another TikToker has gone similarly viral for sharing their tip to make sure their creamer isn’t stolen—and a warning against trying stunts like those featured in the above videos.

In a video with over 187,000 views, user @urgaybestfrannnx10 gives what he refers to as “unsolicited advise” while suggesting that the original poster could get in legal trouble for their prank.

“I literally put a tape around where you can unscrew it, and then I put tape on top of it,” he details. “If somebody drinks [the original poster’s creamer], and they get really sick, you can get into a lot of trouble.”

“Tape it up, put your name on it, and make it difficult for them to get into it,” he advises. “They’ll stop. I promise.”

While commenters under the video tried to claim that the woman was within her rights to add whatever she wanted to her own creamer, it appears @urgaybestfrannnx10’s statement about legal issues stemming from doing this appears accurate.

After a video showing a woman adding laxatives to her creamer went viral, a lawyer jumped in to offer a similar warning.

“This is a crime, don’t do this,” the lawyer stated at the time. “It doesn’t matter if you write ‘Do not use,’ you know they’re going to drink it.”

“If you are doing it with the intent of someone drinking it and getting sick, it’s illegal,” the lawyer added. “Having your name on it won’t be a defense.”

Still, some users under @urgaybestfrannnx10’s offered their own tales of similar workplace revenge.

“Some kept eating my lunches so I put a ghost pepper in my soup and it turns out it was HR lady,” claimed a commenter.

“We had one lady at work switch hers to orange juice for a lil bit,” alleged another. “Obvious enough ppl wont drink it, but jarring when you aint expecting.”

“I just filled an empty one with water after I finished it and put it back, fixed that,” a third shared.

The Daily Dot reached out to @urgaybestfrannnx10 via email.