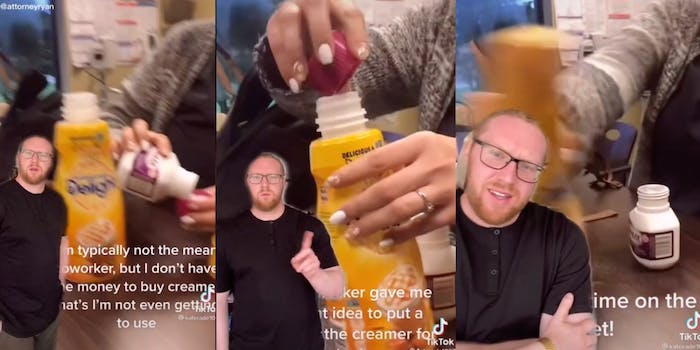 In a now-deleted TikTok video, a woman adds laxative powder to her coffee creamer because she said her co-workers kept stealing it.

Another TikTok user, @attorneyryan, who the Daily Dot can confirm is a labor lawyer, reacted to the video in one of his own. He alleged that putting laxatives in the coffee creamer, knowing that someone else would steal it, is illegal despite the fact that it belongs to her.

“Got tagged in this a lot so let’s talk about it,” @attorneyryan says in the video. “This woman is putting a laxative in her coffee creamer because her co-workers keep using it. This is a crime, don’t do this. It doesn’t matter if you write ‘Do not use,’ you know they’re going to drink it.”

For the commenters who believed the woman was in the right because the creamer belongs to her, @attorneyryan, who has dubbed himself the “Labor Lawyer,” had an answer for them. “Extreme example: you can’t put a trap behind a ‘no trespassing’ sign and get away with hurting someone,” he wrote.

But still, others felt she had a right to protect her coffee creamer from sticky fingers. “Yeah stealing is a crime also which they are doing by STEALING her creamer,” one commenter wrote.

Their sentiment was shared by multiple viewers.

“People have done this in plenty of business.. as long as it has your name on it.. you can put whatever you want in the jug..” another wrote.

However, the “Labor Lawyer” says that’s not an appropriate excuse, because the woman is essentially setting a trap.

“If you are doing it with the intent of someone drinking it and getting sick, it’s illegal,” @attorneyryan alleged. “Having your name on it won’t be a defense.”

The TikToker even went so far as to agree this is “100% poisoning.”

The Daily Dot has reached out to both @attorneyryan and the original poster of the video.