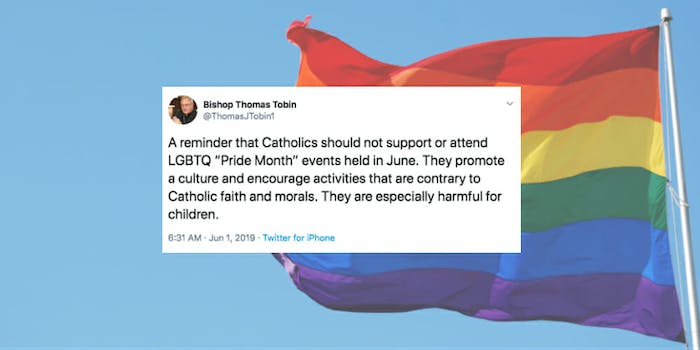 He said pride events are 'harmful for children.'

Rhode Island Catholic Bishop Thomas Tobin tweeted out a message to Catholics, warning them the dangers of Pride events, especially for children. The tweet quickly backfired.

“A reminder that Catholics should not support or attend LGBTQ ‘Pride Month’ events held in June,” Tobin wrote. “They promote a culture and encourage activities that are contrary to Catholic faith and morals. They are especially harmful for children.”

A reminder that Catholics should not support or attend LGBTQ “Pride Month” events held in June. They promote a culture and encourage activities that are contrary to Catholic faith and morals. They are especially harmful for children.

People were quick to point out the hypocrisy in the tweet.

“Reading the news it seems that Catholic bishops are way, way more dangerous to children than all the Prides ever,” Esa Annala wrote on Twitter.

What are you taking about. The Catholic Church abuses you kids unlike people who attend Pride! Sick fuckers https://t.co/WawtXLDfUL

Kids are in far more danger at a catholic church than at a gay pride gathering.

I would trust my four kids more at a pride parade than in a Catholic Church. For so many reasons.

A reminder that Satanists should decide for themselves if they support or attend LGBTQ “Pride Month” events held in June. As a carnal religion, Satanism embraces all forms of consensual adult sexual activity and gender identity. But keep kids away from Catholics, just to be safe. https://t.co/3OvQuRSL03

Twitter came through with the receipts because the fact that Tobin was served as auxiliary bishop of Pittsburgh, Pennsylvania, from 1992 to 1996 was also brought up.

A grand jury said in 2018 that the Catholic Church in Pennsylvania was responsible for covering up decades of the sexual abuse of about 1,000 children by more than 300 priests.

A reminder that Thomas Tobin covered up 300 priests who abused over 1000 children during his time as a Bishop in Pennsylvania. Thomas and hundreds of other priests are the ones who are harmful to children and our society NOT any LGBTQ+ events or people https://t.co/4r7eiQwyTF

Tobin is known for being an outspoken conservative. When former President Barack Obama announced his support for same-sex marriage in 2012, Tobin told the Providence Journal, a local newspaper, that “it was a sad day in American history.”