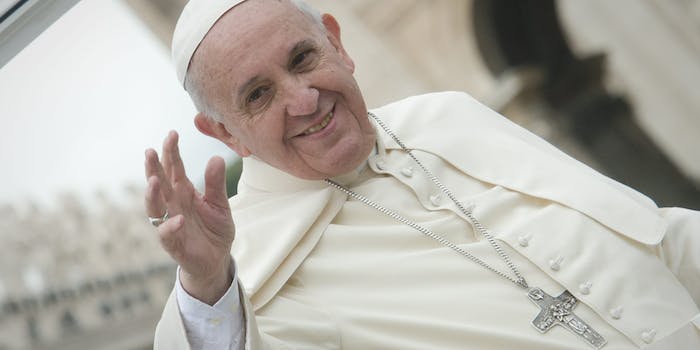 In a new book, 'The Strength of a Vocation,' Pope Francis said being gay is now ‘fashionable’ which can influence the clergy negatively.

Pope Francis believes gay people should not be joining the Catholic clergy and that homosexuality is “fashionable” and is a “mentality” that can have an impact on the Church.

In a new book, The Strength of a Vocation, which was released in Italy on Sunday, the pope said he is “concerned” about homosexuality which he considers a “serious issue,” the Guardian reported on Saturday.

“The issue of homosexuality is a very serious issue that must be adequately discerned from the beginning with the candidates,” he said about would-be priests in the new book, which is set to be released in 10 languages on Monday. “In our societies, it even seems that homosexuality is fashionable and that mentality, in some way, also influences the life of the church.”

Since assuming the papacy in 2013, Pope Francis has been a favorite among many with his progressive stances— such as the condemnation of climate change deniers, support for immigrants, and forgiveness for abortions. He even tied with President Donald Trump as America’s “most admired man” in 2015.

Months after becoming pope, he reaffirmed the Roman Catholic Church’s stance on homosexuality—that homosexual acts are sinful, homosexual orientation is not.

While Pope Francis has otherwise been relatively accepting of the gay community, a 2016 decree on training Roman Catholic priests advocated abstinence and for barring gay men and those supporting “gay culture” from the holy order, according to the Guardian.