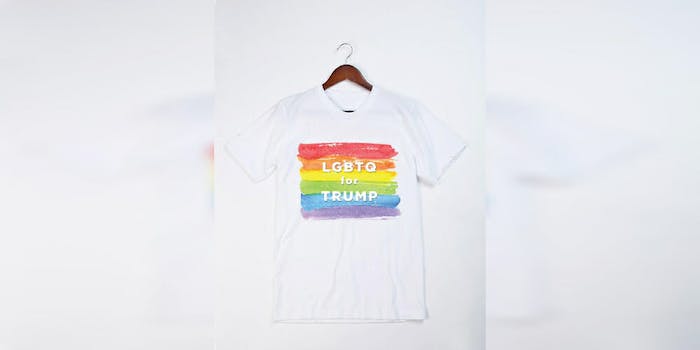 People are confused and angry after learning that Trump is selling rainbow Pride shirts on his website, despite his repeated attacks on the LGBTQ community.

For the low, low price of $30 you can advertise to everyone your internalized homophobia with a rainbow Trump Pride shirt, in spite of the fact that Trump has never actually recognized Pride month during his time as president. The white cotton t-shirt has a rainbow watercolor design that looks vaguely like stock art, and an ugly, stoic white font declares, “LGBTQ for TRUMP.” It looks like it was thrown together in Photoshop in approximately 10 minutes. There are certainly better Pride t-shirts that have been designed in less time.

The shirts are on sale right now for $24, perhaps because they are so hideous, but also probably because no one is buying the hypocrisy. During Trump’s campaign, he promised he would “fight for” the LGBTQ community, but like so many things Trump says, that was a lie. Instead, he lifted Obama-era guidelines that protected LGBTQ students in schools from discrimination, appointed anti-LGBTQ federal judges, pulled LGBTQ questions from the Census, told the CDC not to say “transgender” or “diversity,” enacted the trans military ban, and so many more things. Just today, the administration announced a proposed regulation that would permit federally funded healthcare workers, hospitals, and insurance companies the right to refuse services critical to LGBTQ people.

In recent years, many companies and brands have attempted to sell Pride-themed items with varying levels of success. Such marketing campaigns have given rise to the phrase “rainbow capitalism” in the mainstream. Rainbow capitalism is often seen in companies asking queer people to show their queerness by buying things, or through expensive Pride events that are then no longer accessible to poor queer people. While companies selling these products often partner with LGBTQ organizations so a portion of sales go back to the community, Trump has promised no such thing, happy to continue his pattern of giving nothing back to the people he takes from.