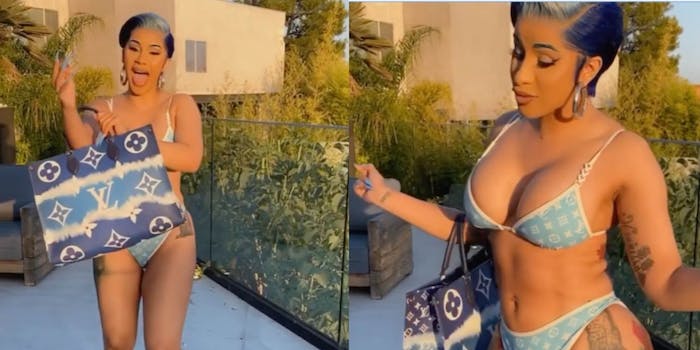 A Photoshopped image of Cardi B in Target recently went viral.

Cardi B’s photos are a bit too spicy for the haters, apparently.

On Monday, the rapper posted a photo to Instagram showing off her newly refreshed massive peacock tattoo. People accused Cardi of editing her body, according to BuzzFeed.

Meanwhile, edited photos of Cardi at Target began circulating on Twitter. The tweet said the rapper looking like a “bum.” Posted by a Nicki Minaj fan, whose fanbase is often considered to be at war with Cardi’s, the tweet was quickly called out for body-shaming.

“She went to Target in workout gear. Yall really gotta stop shaming women for going out looking ‘regular’ and not glammed up all the time,” one Twitter user @Kpholla12 wrote in defense of Cardi.

Cardi responded to the Photoshopping accusations and subsequent body-shaming with an Instagram video.

“I had to do this video because I’m seeing that y’all putting this edited target picture of me looking like a motherfucking square,” Cardi said in the Instagram video.

The rapper said she posted the video to show haters her “spicy body.”

“I know y’all ain’t body-shaming me,” the rapper said.

Cardi has a history of being honest about her body. During quarantine, she posted a video of her stomach, not sucked in for the camera and a video of getting a bikini wax. She’s also been forthcoming about body-enhancing surgery, according to BuzzFeed.

In the Instagram video, Cardi admitted to gaining some weight during quarantine, but said it was to make her “thighs match the motherfucking ass.” At one point, she also stuck her stomach out and said she had just eaten breakfast, lunch, and ice cream.