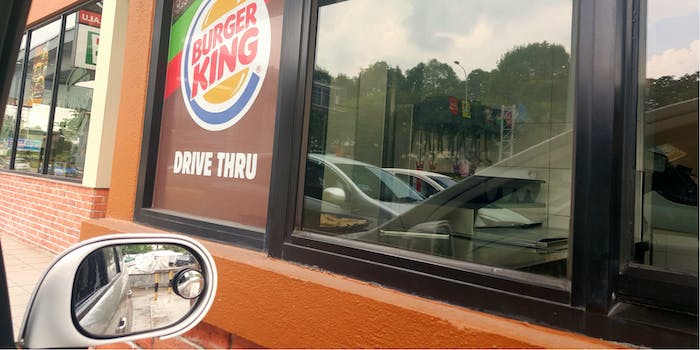 Police offered a $1,000 reward for the woman's identity.

Photos from the surveillance camera at a Burger King in Tennessee show a woman shooting at employees—allegedly because she had to wait for her order at a drive-thru, according to WZTV.

The woman, who has not been identified, allegedly shot a gun inside the window of the burger joint’s drive-thru because she was mad that the wait time for her order was too long.

According to Complex, the woman got out of her car and had an argument with one employee. She allegedly then retrieved a gun from her car and began shooting inside the building.

Surveillance images released by Memphis police and published by TMZ show her pointing a gun into the restaurant while leaning into the drive-thru window.

The employees were able to escape the situation through the back door, according to complex, and none were injured in the incident.

The attacker eventually returned to her car, driven by a male, and left the scene.

Police were still looking to identify the woman on Monday afternoon and announced a $1,000 reward for anyone who could successfully lead police to her arrest, Complex reported.

Multiple viral videos have shown attacks on fast-food workers in recent weeks. Many videos show anti-maskers harassing employees. One video shows a woman going off on a Dunkin’ employee for not saying “have a nice day,” and another video shows a customer ramming a car into Taco Bell employees during an argument.

The Daily Dot asked Burger King how it’s assisting workers who were involved in the shooting and if the company is cooperating with the police investigation.

The Daily Dot also reached out to the Memphis Police for comment.