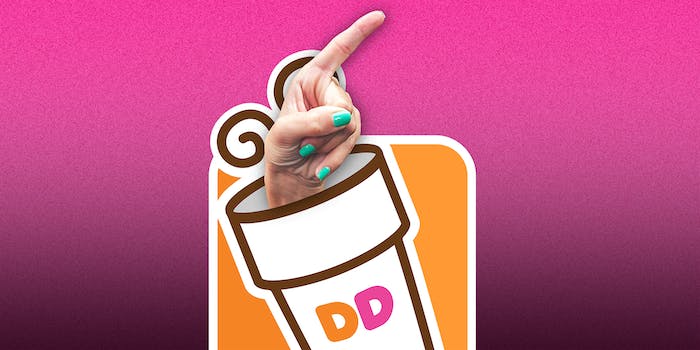 The customer calls the worker a 'b*tch' before speeding away.

A Dunkin’ employee is claiming that a customer verbally abused her after she failed to tell the customer to “have a nice day.” The verbal abuse she was subjected to was caught on camera and uploaded to TikTok.

TikToker “Sommer” posted a video on Tuesday, showing her interaction with the customer at a Dunkin’ drive-thru.

“So who is it? What’s their name?” the customer can be heard asking the worker.

“It’s the store number,” Sommer tells her through the window. “I’m not allowed to give personal information.”

Sommer later revealed in the comments section that the woman wanted to report her for not saying “have a nice day” when she closed the drive-thru window. The incident allegedly followed an earlier complaint the customer had about Sommer.

Sommer refutes the woman’s claim, saying it does work. At this point, the woman can be heard telling someone not seen in the video, “We’re not sorry. Don’t apologize to her,” the woman says.

Sommer wrote in the comments section that the woman was talking to her child, who was in the car with her.

The woman then asks who she can expect to pick up if she calls the number.

“You can call tomorrow in the morning, and there should be somebody here, but we don’t have a manager,” Sommer responds. She revealed in the comments that their manager quit the day before.

“I’m gonna give you the write up, bye b*tch,” the woman says before she speeds away, failing to give Sommer the chance to respond.

Sommer posted the video with the caption, “Imagine having a grown woman who is under the impression that you are a minor come to your job to regularly harass you,” the TikToker captioned the video.

The video has been viewed more than 774,000 times since being posted.

In the comments section, Sommer also said that the woman falsely accused Sommer of bad-mouthing her. “She reported me to my manager saying I was talking shit about her at the window but I had never seen her before that,” Sommer wrote in response to a viewer’s comment.

She also claimed she got written up for the incident and that the woman received a $25 gift card.

It’s unclear where the incident took place, and what policies are in place at the location where the TikToker works, but she claimed she earns less than $11 per hour.

Workers in the food industry are among those facing some of the highest risks during the pandemic, not only due to their exposure to many different people throughout the day but also because of the abuse they often face when trying to get customers to follow coronavirus safety protocols.

According to Indeed reviews by users, including former employees, almost 50% said they did not approve of Dunkin’s’ response to the pandemic.