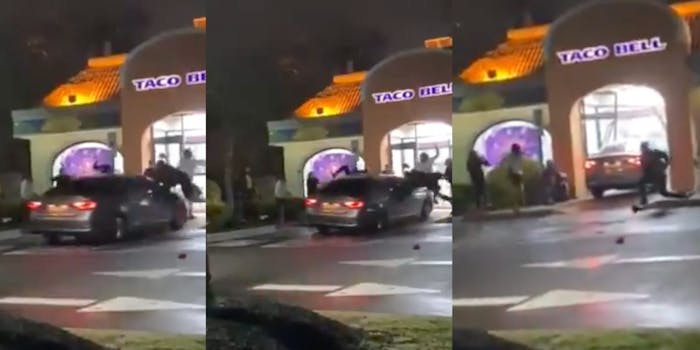 The customer was reportedly upset over their order.

A video has emerged showing a car plowing into a group of people outside a Taco Bell, some of whom are reportedly employees of the location in Waldorf, Maryland.

The video featuring the Wednesday incident was shared by Twitter user @davenewworld_2 on Thursday, garnering 40,000 views in just a few hours.

The video shows a group of people outside a Taco Bell as some kind of commotion goes on.

Diane Richardson, a spokesperson for the Charles County Sheriff’s Office, told the Daily Dot that the group outside the location included both customers and employees.

“We all ready, c’mon,” a woman in black clothing screams at the car.

The car speeds toward them, and the woman runs away from it. The car then reverses, and some in the group continue to yell at it.

The car then speeds toward them again, but it doesn’t stop this time. It rams into the group, knocking over two men, one of whom falls on the ground. The car then smashed into the front of the restaurant. Richardson said none of the injuries sustained during the incident were severe or life-threatening.

“Oh my god,” says the person filming the video.

The people in the vehicle allegedly fled the scene.

According to Richardson, the people in the car were two female customers.

“There was a dispute related to the order, and somebody got out of the car and assaulted the employee who was working at the drive-thru window,” Richardson said.

Richardson said the customer got back in the car and drove to the front of the store, where employees waiting to confront them were standing.

The sheriff’s office was able to locate the vehicle and its owners, Richardson said, and they are investigating who the customers are.

No arrests have been made.

Taco Bell told the Daily Dot in a statement that it is “shocked by this incident and … so grateful to hear that no one was seriously injured.”

“Our franchisee confirmed that the team members who were present are in good spirits and have access to counseling services. The restaurant team is cooperating with authorities in their investigation,” it added.