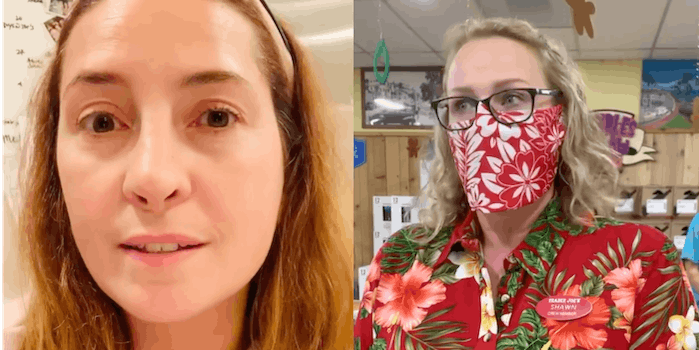 The woman was apparently banned from the Trader Joe's location after 'behaving badly.’

A California woman claims she was banned “for life” from a Trader Joe’s location after she harassed a manager over face masks in San Clemente, California.

Alexis Autenrieth, a chef who makes juices, recorded the Dec. 2 incident on Instagram. She confronts a Trader Joe’s manager who is seen politely refusing her service, citing Autenrieth’s “behavior” the previous day.

In the four-minute-long video, which went viral on Reddit Wednesday and earned Autenrieth “Karen” status, Autenrieth is waiting in line before calling out to employees at the cash register about why she is not being tended to.

She announces that she’s in line about three times, while two cashiers ignore her and go about their business.

“Why won’t you ring me up?” she asks, as the manager, later identified as Shawn, appears and tells her that she is “no longer allowed to shop” there.

When Autenrieth asks why, Shawn says it’s because she behaved poorly the day before.

“How did I behave badly? I wore a mask the entire time,” she says.

“You and I have had issues since the beginning of COVID,” Shawn says.

“I’ve never talked to you once in my life. I don’t know who you are,” Autenrieth says.

Autenrieth says she has a son with autism, who cannot wear a mask.

“It has nothing to do with that,” Shawn says. “We offered to do your shopping.”

“And I politely said ‘no,’” Autenrieth responds.

“You did not. You barged in past everybody,” Shawn responds.

Autenrieth does not deny this and instead goes quiet for a bit before threatening to “send this to corporate.” She also demands to know Shawn’s last name and insinuates she was refused service because of her 10-year-old autistic son.

Autenrieth then tries to argue that she has a right to shop in the store because it is a public place. Trader Joe’s, as the manager points out, is a privately owned company.

Another customer intervenes to defend Shawn and confirm it is private. Autenrieth begins dismissing her.

Autenrieth told the Daily Dot that the previous day, she went to the store after picking up her son from school. She said she’s been going to the location for 11 years and has never been involved in a confrontation with the employees there.

She said that an employee told her she wouldn’t be allowed in the Trader Joe’s with her son, who was not wearing a mask. However, in the video, the manager also claims that Autenrieth fails to wear her mask properly while in the store.

Autenrieth says she told the employee she has been going to the location with her son during the entirety of the pandemic and that he’s autistic and can’t wear a mask.

She alleges that the employee told her the store’s policies changed and asked Autenrieth to leave her son outside the store, which Autenrieth did not want to do. The employee then offered to do Autenrieth’s shopping for her. She refused.

She says that she went into the Trader Joe’s anyway and was approached by two employees while in the store. They allegedly reminded her shoppers are not allowed in the store without a mask. When she refused to put a mask on her son, she says she was asked again to leave her son outside. She says another employee then approached her with the same issue and said he would call the police, but Autenrieth says no officers arrived during her time there.

She says she received phone calls from two Trader Joe’s employees “profusely apologizing” to her and saying she is not unwelcome in the grocery store. Trader Joe’s did not respond to a Daily Dot query regarding this claim.

In a statement to the Daily Dot, Trader Joe’s said customers are required to wear face coverings that meet the “standards of applicable health authorities,” but young children and those with medical conditions that prohibit them from wearing face coverings are exempt. However, this exception has been lifted under the Regional Stay Home Order, which was announced on Dec. 3.

In the video’s caption, Autenrieth called for a protest outside Trader Joe’s the following day. A few, apparently, heeded her call.

An account by the name i_stand_with_shawn has since cropped up in support of Shawn. The description claims Auntenrieth is “exploiting her autistic child to accomplish” her goal of getting Shawn fired for following the store’s rules. The account holder did not respond to a Daily Dot’s request for an interview on Thursday.

According to messages the account has received and is sharing, other parents of children with disabilities are claiming Autenrieth gives them a bad rap.

“It’s unfortunate because it gives parents of special needs kids a bad rep when people exploit their kids,” read one message. “There’s no better way to stifle your kid’s potential than to be the one to tell them they can’t do something because of a disability.”

In a video from the protest, demonstrators, allegedly including Autenrieth, are outside Trader Joe’s cheering on a “maskless family” who successfully completedly their shopping sans masks.

In a follow-up video, in which Autenrieth says she “forgives” Shawn, she claims that every person is an essential worker.

“Every person that is trying to live and survive at this time is essential—no one person is more essential than the other,” she says in the video that was posted to her Instagram on Tuesday.

When she was asked if she believes she was putting herself, a chef who works out of her home, on an equal footing with healthcare workers and grocery store employees who are exposed to thousands of people weekly, she told the Daily Dot she believes “a 100%” that she is as essential as them.

A Trader Joe’s employee makes about $11-$20/hour and belongs to one of the hardest hit demographics in the country.