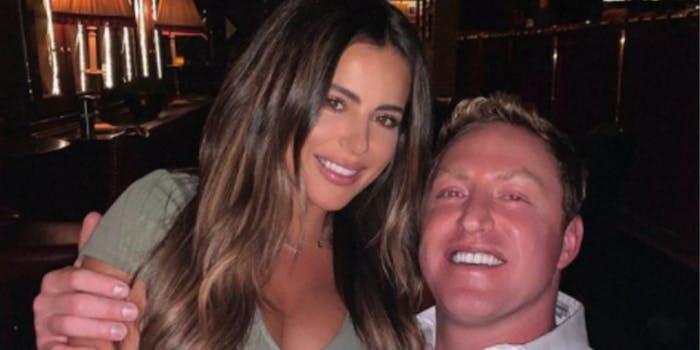 After Brielle Biermann, 23, posted a photo of herself sitting on her stepdad’s lap, commenters debated about whether or not it was appropriate. Some people called the photo “uncomfortable” or “triggering.”

Biermann is the daughter of Real Housewives of Atlanta star Kim Zolciak-Biermann and boasts over 1 million followers on the platform. Zolciak-Biermann married NFL player Kroy Biermann in 2011, and he later adopted Kim’s two daughters, Brielle and Ariana, in 2013.

In honor of his birthday, the influencer posted the photo with the caption, “HAPPY BIRTHDAY to the most amazing father & man I’ll ever know… we had too much fun last night [I] forgot to post yesterday, love love you dad!”

One user commented, “Why you sitting on your momma husband lap?”

Another person wrote, “That’s a little uncomfortable she is an adult sitting on her [stepfather’s] lap.”

Some people have gone as far to suggest the two have “hooked up.”

However, many fans of the famous family were quick to come to her defense, saying that the claims were unfounded and that people should respect the relationship the two have.

“Some of these comments are ridiculous! A child sat on her dad’s lap … what is abnormal about that! I cannot understand why anyone would teach their child not to sit on their [father’s] lap as some people have stated!” one commenter wrote.

People also pointed to the “strength” it takes for a person to adopt a child and raise that child as their own, as Kroy very publicly has.

“Takes a very special man to adopt children & take them in as their own,” one person wrote. “You & your sister… your whole FAMILY, is so fortunate to have Kroy.”

Brielle eventually responded to the criticism herself in a reply to a user’s comment, writing, “Honestly bc I had no where else to sit we were making jokes the whole time about him being Santa it was comedy.”