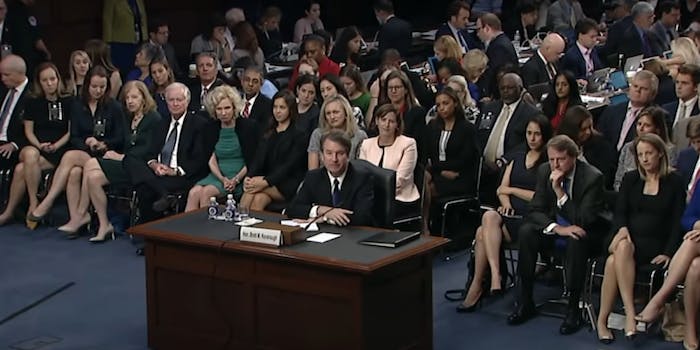 Kavanagh was responding to a question from Sen. Ted Cruz (R-Tx.), who, after talking basketball, brought up the judge’s stance on the Priests for Life v. HHS case.

In 2013, Priests for Life filed a lawsuit against Health and Human Services over the Obamacare mandate that certain healthcare providers had to cover birth control. The U.S. Court of Appeals ultimately ruled against the Catholic group the following year, but Kavanaugh penned a dissent, saying he would have allowed employers and universities to deny birth control coverage.

On Tuesday, the first day of Kavanaugh’s hearing, Cruz had used the “abortion-inducing drugs” line to reference a different but similar lawsuit filed by Little Sisters of the Poor.

“Our Democratic colleagues want justices who will rubber-stamp efforts like the Obama administration’s efforts litigating against the Little Sisters of the Poor,” he said. “Litigating against Catholic nuns, trying to force them to pay for abortion-inducing drugs.

In case this wasn’t clear, birth control prevents pregnancy; it does not induce abortion. To have an abortion, you have to actually be pregnant.

Newsflash, Brett Kavanaugh: Contraception is NOT abortion. Anyone who says so is peddling extremist ideology – not science – and has no business sitting on the Supreme Court. #WhatsAtStake #StopKavanaugh https://t.co/gaZA3AnIcE

Kavanaugh just referred to birth control as "abortion-inducing drugs," which is not only an anti-science lie, it's an anti-choice extremist phrase that shows that our right to access both abortion and contraception would be in SERIOUS danger if he is confirmed. #StopKavanaugh pic.twitter.com/TWqaU0YjmH

Last October, President Donald Trump rollbacked the Affordable Care Act’s birth control provision, so it’s no longer mandatory for employers to pay. Since then, prices for birth control have shot up.