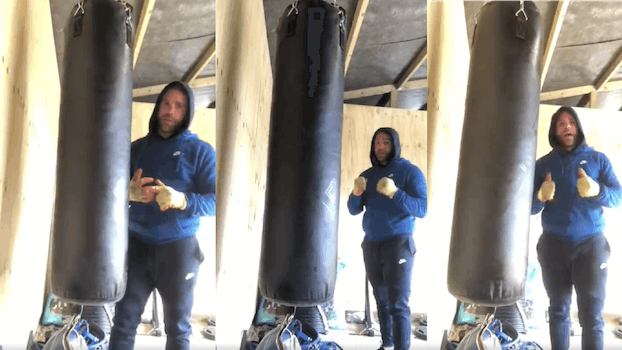 Domestic violence is expected to rise during stay-at-home orders.

Boxing champ Billy Joe Saunders has issued a lukewarm apology after a video circulated in which he offers to teach men how to hit women while stuck in isolation.

The tutorial reportedly made the rounds on WhatsApp before going public. In it, Saunders stands next to a punching bag in a barn and declares that he wants to “make a little video for all you dads, husbands, if you’ve got girlfriends, etcetera.”

“Obviously, this COVID-19 thing is getting quite serious and we are isolated in tight spaces,” he says, before offering up a hypothetical scenario to the viewer in which “your old woman is giving you a little bit of mouth” and you’ve run out of patience.

“So as she comes in, she’s just about to say something, and all of a sudden you explode,” he continues, demonstrating the punch on the bag. “Bam! On the chin.”

“At this time, she may flash and see white. … She’s in a state of horror at the minute. She don’t know what’s going on. That flash has come. And all of a sudden, you just dip down on that knee—’he punches again’—and spring up, so you finish her off. That should do the trick.”

After the clip went public, Saunders jumped on Twitter and tried to play the whole thing off as a joke.

“I would never condone domestic violence and if I saw a man touch a woman I would smash him to pieces myself,” he wrote. “I have a Daughter and if a man laid a finger on her it [wouldn’t] end well. Apologies if I offended any women stay blessed.”

The responses were immediately split between fans who were annoyed people didn’t realize the video was “obviously a joke” versus folks who just… don’t find encouraging domestic violence funny.

An increase in abusive situations has been a serious concern as people hunker down in their homes for the foreseeable future. According to the Guardian, reports of domestic violence in the Hubei province “more than tripled in one county alone during the lockdown in February,” and other areas enacting or suggesting forms of lockdown are experiencing similar upticks in reports of abuse.

Saunders himself hasn’t commented any further on the incident, other than to complain about publications calling him out for a video that was clearly, in a best-case scenario, in incredibly poor taste.

Update 11:11am CT, March 30: Saunders has had his boxing license suspended because of the video, the British Boxing Board announces.