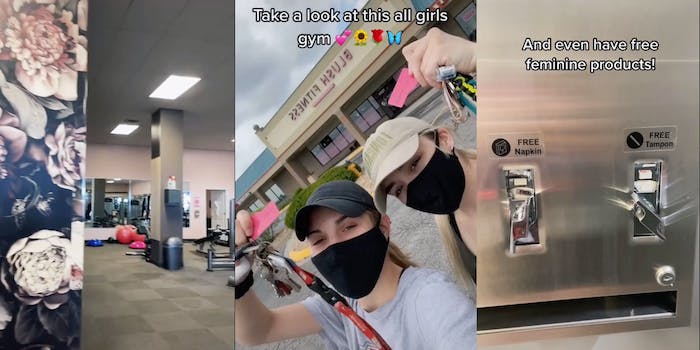 A Kansas gym that caters exclusively to women is getting flack online from a swarm of angry men crying “segregation” over the concept of a space that doesn’t welcome them.

Blush Fitness bills itself as “everything a woman needs” and, according to a viral TikTok from user @heatherhuesman, that claim appears to be true. The TikTok, uploaded in late April, has earned nearly 6 million views, alongside 1.8 million likes and tens of thousands of comments, many from men melting down over the concept of a female-exclusive space.

Huesman’s TikTok reveals a gym coated in gentle pink and grey tones, tasteful flowers, and sleek, simple design. She notes several of the gym’s features, like tinted windows, member-only access, 24-hour service, and signs detailing when male trainers will be in the building. It even offers free feminine products in the bathrooms and free babysitting for members.

Honestly, apart from the feminine twist on things—and the exclusive access—it pretty much looks like any other gym. Huseman wanders through the free weights area, past sleek new machines, and into designated training rooms.

The opinions of viewers have generally split down gender lines. There were plenty of men who supported the idea of a gym exclusively for women, but very few women joined the naysayers in their complaints of “segregation” and “oppression.”

Women and their allies primarily lauded the creators of Blush Fitness for finally making a safe workout space for women. Women have long struggled to feel comfortable exercising alongside strange men, a fact that is illustrated by the recent viral stream of content calling out men for their creepy behavior.

Many of the men viewing Huesman’s video were blind to the constant struggle of being female in a space some people consider “male,” however, and proceeded to throw a grade-school level tantrum in the comments.

An embarrassing number of men completely melted down, blubbering about how Blush “doesn’t sound like equality” and decrying the “discrimination and segregation” of a single-gender gym.

A few men even claimed they “swear we’re going backward in time.” But to think that a female-exclusive gym is somehow a “thing of the past” was too laughable for most commenters to even give it the time of day.

A huge number of men also demanded to know how women would react if a male-only gym were to open, clearly aiming to prove a point. They were promptly put in their place. Nearly every response to the idea of a male-exclusive gym boiled down to the same sentiment: “Go for it.”

“If it helps more guys be comfortable working out I don’t see an issue,” was a common response.

In a baffling attempt to twist the narrative, men started to support their arguments with the idea that *checks notes* men probably built the gym? And since men were probably hired to lay concrete and build walls, they should get access to that space?

Just like the men who built my house. They should have exclusive access to the space for the rest of their lives, right? I mean, they built it, after all.

Past all the men wailing about “sexism” and “misandry,” women tried to explain why a gym like this is necessary. There is proof littering the internet.

Like the viral story from April in which a woman confronted the man taking pictures of her butt while she was working out.

Or the woman who caught a man snapping photos of her mid-workout, thanks to the mirror she was filming in front of.

There are many similar examples, as women make viral moments out of the resulting confrontations. But that’s the thing: Women shouldn’t have to be on guard every time they visit the gym. They shouldn’t need mirrors and cameras to watch their back for the next creep with a camera. But since they do, spaces like Blush Fitness exist.

And as noted by hundreds of commenters, there are already plenty of gendered spaces and products. The country is awash with “gendered restrooms, clothes, toys, toiletries, and boys/girls only schools,” so why does a female-exclusive gym need to be a big deal?