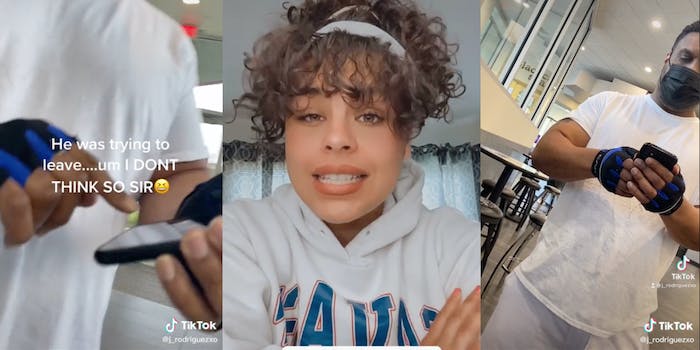 ‘Delete it right now’: TikToker confronts ‘creep’ who took photo of her working out at Planet Fitness

'Delete it right now before I make a f*cking scene.'

A TikToker is being praised for sternly confronting a “pig at Planet Fitness” who secretly took a photo of her butt while she was working out.

Janelle Rodriguez shared a series of videos to her TikTok account on April 18. In the videos, she confronts the man for taking a photo of her and demands that he delete it in front of her.

“Someone just came and told me you took a picture of me,” she politely says in the first video, which has been viewed over 3.5 million times.

“Yes. … I just wanna know, did you do it or no?” she asks. “Can you show me your last picture … the last current picture on your phone?”

She then threatens that she is going to get the manager to play the security camera to see if he took her photo. The man appears to be fumbling, and at one point says, “I don’t do that.”

“It’s OK because I’m gonna check the camera,” she says.

In a second video, she continues demanding to see the last photo on his phone. After stalling for some time, the man finally agrees to show her his phone.

He can be seen scrolling through his phone, and Rodriguez reiterates, “Someone just pointed straight to you, so I’m just trying to get to the bottom of it because that’s really disrespectful if you did [take a photo].”

He shows her his phone and text across her video reads: “I saw a close up of my butt on his phone!!”

“The last picture—I see it right there, so you’re lying,” she says, her voice rising.

“So delete it right now before I make a fucking scene,” she repeatedly screams.

In the third and fourth videos, she continues to yell at the man, demanding he delete the photo, as the man tries to leave the gym.

“No, delete it right now! How dare you?” she screams, as he repeatedly tells her to “relax.”

“Delete it right now before you fucking leave. … How dare you take a picture of me while I’m working out,” she says to him.

She then says, “Delete it, please,” to which he starts tapping on his phone screen and says, “Yes. OK. Relax, relax. OK, it’s all right. I’m sorry.”

To ensure the photo isn’t still in his phone in his “recently deleted album,” she says, “Delete it out of your recently deleted, too. I know how these phones work.”

“It’s out,” he repeatedly says, showing her his phone.

“Go to your recently deleted album right now. I don’t want my body on your phone. This isn’t your body. Fucking piece of shit,” she says.

In the update, she says she wanted a sincere apology from the man and an assurance that he would never do it again.

Many—including women who say they were subjected to similar harassment in the past—are supporting and praising the TikToker for how she handled the situation.

“You have been an inspiration to me for sticking up for yourself,” one user wrote.

“I’m so proud of you. That took a lot of courage and men need to start being held accountable,” another said.